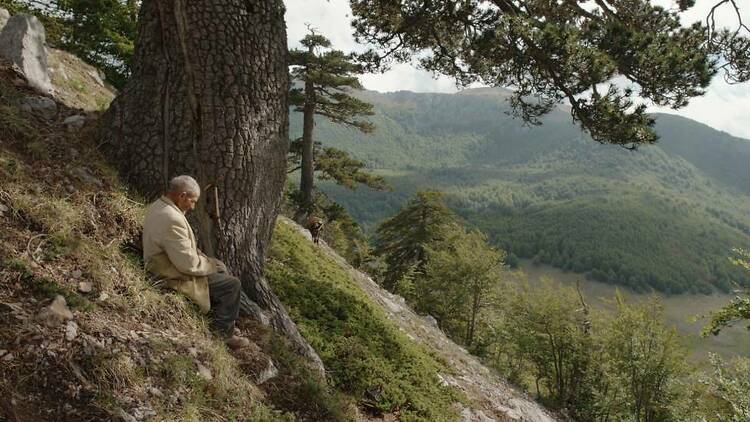 Il Buco explores the Bifurto Abyss and the Calabrian locale

Meantime, young speleologists in Turin organize their October 1961 campaign to map the Bifurto Abyss in that Calabrian region. Europe’s deepest cave, the third largest on Earth, reaching seven hundred meters in depth, the Bifurto Abyss appears like a yawning cavern in the unnamed shepherd’s neighborhood. Cross cutting between Abyss’ nearby, isolated village and the cave explorers’ tent camp, Il Buco, meaning The Hole, casts its spell with few words, the sounds of nature defining the vividly vibrantly environment.

Their way lit primarily by headlamps, team members lower themselves down on electron ladders and ropes, penetrating the cave’s mysteries, ever farther advancing through dark shafts and twisting tunnels to discover a hidden pool. Cinematographer Renato Berta captures this unnerving darkness as it yields to disruptive light. And as the old herder quietly observes his livestock and as the cave crew advances into the twenty-nine pits of the Bifurto Abyss, the parallels between delving into human nature and the cave become clear. Ominously, this mapping takes its toll on the old man’s health. In fact, Frammartino, co-writer as well as director, believes that “mapping the cave is a kind of colonization [for] the cave is desecrated.” Indeed, a dark, previously inscrutable universe is now documented.