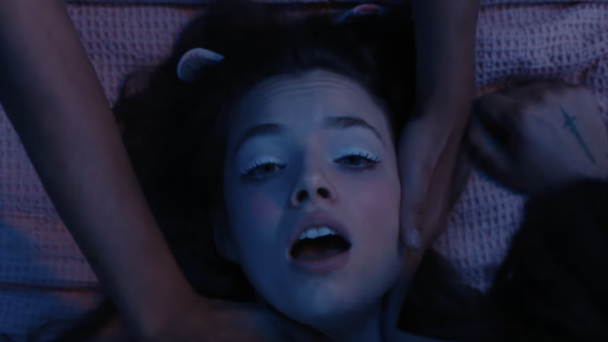 Nobody is a film genius either, these days at least. At least not in Lena Dunham’s latest. Sharp Stick is one of the films you watch and glean very little from unless you act like “some schmoe off the bus from Idaho,” which the lead character, Sarah Jo (Kristine Froseth), does with alacrity. Sarah Jo is a fantastic caregiver, and has a way with challenged kids that would make her a star for any family dealing with a child with issues.

And interestingly, Sarah Jo is presented as a buttoned up, long skirt wearing 26-year-old-virgin in Los Angeles living with a hot Instagram model sister named Treina (Taylour Paige), who takes sexy thirst snaps, and a multiple divorcee mother, Marilyn (Jennifer Jason Leigh), who drinks buckets of white wine and does recreational Percocet. At the same time, mom holds court with her two daughters and waxes about her glory days as Hollywood arm candy fending off choads and toads.

But Sarah dresses, thinks and acts as if she just escaped from a Northern Idaho fundamentalist LDS Sister Wives enclave. She is so blithely unaware of life, you wonder whether she might be more cognitively challenged than the kids in her care.

As we watch her in action, her work ethic and guilelessness show that she is unquestionably a devoted and natural caregiver. Her employers, Josh (Jon Bernthal) and Heather (Lena Dunham) are in a parent-child marriage, with Dunham’s Heather being the earner mother in charge and Jon Bernthal’s Josh being the perpetual Goofus teenager. Naturally, this stay-at-home dad needs a good whack with a newspaper now and then.

The conceit is that Sarah Jo has serious self-esteem issues over her hysterectomy and subsequent menopause at age 17 (this is a Lena Dunham film, y’all) and she decides that Josh, the father of the challenged child she cares for, should be her first lover.

To his credit, Josh initially resists — until he is cornered by the insistent Sarah Jo. Despite his protestations and outright confession that he is a loser and no good for her (check and check), he rises to the occasion. The torrid affair begins.

That said, Jon Bernthal as Josh is the bright spot of this film: you cannot dim his sex appeal, not even with a Moe/Three Stooges haircut and despite his loathsome manbaby persona. When he subserviently buckles to Heather’s emotionally controlling mechanisms, he charismatically nails this self-proclaimed man-dirtbag to the letter. Bernthal’s range as an actor is remarkable.

Sarah Jo, whose cognitive skills are on par with a nine-year-old’s, internalizes the rejection and attributes the end of the end of the affair end to her being bad at sex, To improve her lovemaking skills, scorned Sarah Jo “arts and crafts” herself a porn-based vision board where an A-Z menu of sexual acts becomes her bucket list of to-dos. At this point in the film, you will yearn for one of those the good old ‘May-December affair films’ like Last Tango in Paris that deal with heartbreak and sex in a more sophisticated albeit buttery way.

Eventually, Sarah Jo meets a great guy, Arvin (Luka Sabbat), who is a total keeper. But the film’s ending suggests that she will also extinguish that one ray of light that brightened her cloistered LA life. Bottom line: Poor Sarah Jo. And poor us who had to watch Sharp Stick.