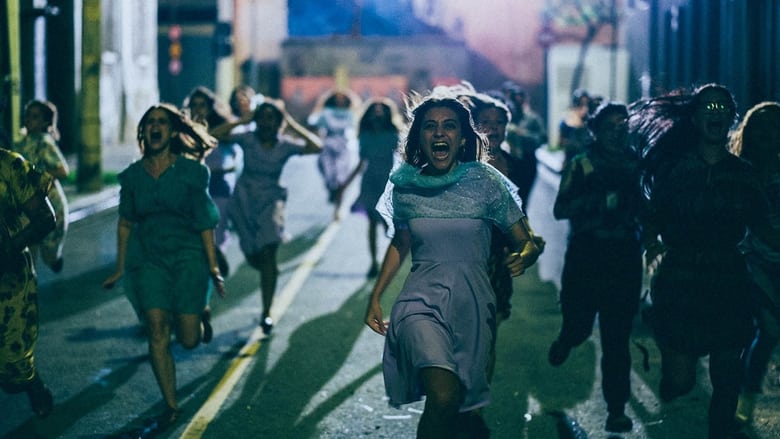 A group of young women wearing non-descript white masks, roam the streets of Rio tracking down other women they feel are “sinful,” and assaulting them until they commit, on camera and live-streamed onto social media, to renounce their evil ways and embrace Jesus.

One might think that this in-and-of-itself would provide enough fodder for a film but in her second feature film Medusa, writer/director Anita Rocha da Silveira marries the rise of religious vigor with observations on obsession, the perils of social media, peer pressure and, perhaps most troubling (always) how young women interact in groups.

Mari Oliveira, who first appeared in da Silveira’s feature film debut Kill Me Please, takes the lead here as Mariana, a member of a religious organization that prominently recruits handsome young men and beautiful young women, into their ranks. The cult-like church is a direct descendent of the Evangelical movement – da Silveira has previously noted that the film is, in part, a response to the rise of evangelicalism in Brazil – but da Silveira spends little time building out this religious movement in any sort of detail, trusting that the wide brush stokes are familiar enough for the audience to capture the messaging. This is, after all, only one minor part of this story.

In an effort to discover what happened to one of the victims of their cruelty, Mariana takes a position working at a hospital where her victim lies disfigured. The job and the knowledge of what she’s done, slowly begins to unravel Mariana who has a crisis of faith that slowly tears her apart and puts her on the outside of the religious group before her entire belief system disintegrates in gloriously disturbing fashion.

While there’s much to love about Medusa, the film occasionally feels repetitive and bloated, with too many concepts and ideas incorporated with few of them fully explored. While leaving the audience to fill in gaps is often preferable, da Silveira relies on this too often and as a result, the movie sometimes feels like the messaging is not fully developed. The fact that the film is trying to cover so many different ideas doesn’t help.

Though Medusa has setbacks, there’s a much to appreciate craftwise. João Atala’s cinematography which borrows from the giallo tradition and marries it with the neon-clad visuals which are currently on-trend, makes for a beautiful and disturbing spectacle for the eyes. Music supervisor Gustavo Montenegro builds a gorgeous soundtrack of haunting tunes that both subvert and underline the messaging; Siouxsie and the Banshees’ gorgeous “Cities in Dust” is particularly memorable. Oliveira’s performance is mesmerizing as, is Thiago Fragoso’s turn as Pastor Guilherme.

It may not be perfect, but what film is? Medusa is never boring and is truly an exhilarating watch. It’s wonderful to see a fresh new voice tackling important social issues and da Silveira certainly proves that she’s up to the challenge.