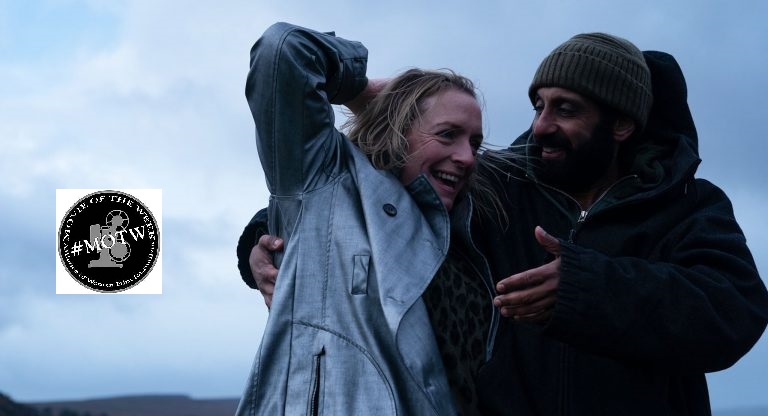 Two lonely, good-hearted people yearning for companionship and affection find each other in writer/director Clio Barnard’s sweet, understated, music-infused romantic drama Ali & Ava. As their relationship progresses from acquaintanceship to friendship to love, Ali (Adeel Akhtar) and Ava (Claire Rushbrook) must acknowledge and move past the personal history and circumstances that make them hesitant to believe in and embrace the happiness they’ve discovered in being together. The film, which is set in the Yorkshire city of Bradford, introduces viewers to Ava, a kind single mom/grandmother and primary school classroom assistant, and Ali, a genial landlord who has a kind word and smile for everyone and loves to dance. They meet each other through young Sofia, who’s the child of Ali’s tenants and a student in Ava’s class. A rainy-day ride home leads to the discovery of a shared interest in music, and a connection is established. But their road to true love has many bumps, including the fact that Ali is still married and that Ava’s late, estranged husband physically abused her when they were together.

Rushbrook and Akhtar both deliver excellent performances, expertly balancing their characters’ vulnerability and tendency to put a brave face on things. Some of the movie’s most compelling scenes are when Ali and Ava decide to trust each other with their personal, painful stories of hurt and loss — the faith it takes to do that is clear, and it has a powerful impact on the characters. Empathy and comfort are what they both need, and what they value in each other.

The beauty of Ali and Ava and their story is the authenticity that Barnard brings to her script and direction. Ali and Ava are everyday middle-aged people; they aren’t glamorous or Hollywood-ized in any way. But that doesn’t mean their romance is any less compelling — on the contrary, it makes it powerfully relatable. They make mistakes, they second guess themselves, they don’t always say the right thing. Underneath it all, though, is their longing to find someone they can really be themselves with — and isn’t that what we all really want most? — Betsy Bozdech

Loren King Among the many pleasures of writer-director Clio Barnard’s lovely and tender drama is that it features two middle aged people overcoming the divisions of race and class and all the blows of a hard-lived life to forge a believable bond. The romance is so natural that it depends entirely on the two leads. The film is ably carried by gritty but seemingly effortless performances by Adeel Akhtar as easy going British Pakistani landlord and part time DJ Ali and Claire Rushbrook as Irish grandmother and classroom aide Ava who has left an abusive husband and carries the scars. Barnard so memorably set her stunning docudrama The Arbor (2010) in a Bradford estate and that’s the place Ava lives, too; it provides a home to the kids and grandkids who are always around her. Ali is also in a fraught domestic space. He’s holed up with his LP collection in a basement, still living with his wife though they’re separated. Ali and Ava bond over music in an exhilarating scene. Barnard in her richly atmospheric yet subtle style tells a warm and compelling story of love and connection.

Nell Minow: You almost want to hold your breath watching this film because it is so intimate, so real, it seems the characters might hear you and stop sharing their story. It’s good to see Secrets and Lies star Claire Rushbrook again bringing her gift for making us care about the characters we might overlook if we met them in real life. Clio Barnard invites us into the lives of Ali and Ava, messy and vulnerable as they are, and lets us discover them as they discover each other.

Marilyn Ferdinand Two people dealing with deep heartache meet and find comfort and connection with each other. This is the plot outline of many movies, but few have the lived-in quality of Clio Barnard’s third feature film Ali & Ava. Adeel Akhtar and Claire Rushbrook brilliantly play the property manager/DJ and elementary school assistant whose connections to their Muslim and Irish Catholic communities, respectively, are the lifeblood that make this film more than a love story. Whether managing a houseful of children and grandchildren or working with a schoolchild with developmental challenges, Ava reveals her deep heart and how easily it can be broken. Ali’s joie de vivre masks the pain of his separation from his wife (Ellora Torchia). It might have seemed inevitable that these two loving people would find each other, but family expectations force a reckoning for them both. Beautifully naturalistic filming by cinematographer Ole Bratt Birkeland gives viewers a world that feels familiar, yet specific, and Barnard’s careful music choices do what music does best—express the emotions of the moment.

Jennifer Merin Clio Barnard based her titular characters on people she’d actually met in real life. That undoubtedly gives Ali and Ava their fundamental sensibility and feel of authenticity, which is fully realized in the exquisitely nuanced performances by Adeel Akhtar and Claire Rushbrook. While focusing on the very relatable human needs of Ali and Ava, the ever-masterful Barnard expresses and explores gripping socially relevant issues revolving around loneliness and grief, aging and personal transformation, ethnic prejudices, fidelity and the unfulfilled needs of the working class. It all adds up to a thoroughly engaging and rewarding watch. Read full review.

Susan Wloszczyna: Ali & Ava is the latest film by British filmmaker Clio Barnard, one that resonates with a sweet dose of social realism set in the ethnically diverse working-class neighborhood of Bradford, England. It is also a rare middle-age romance. Read full review.

Leslie Combemale The intricacy of both lead performances in Ali & Ava is magnetic enough to galvanize audiences, especially as they lean into their considerable chemistry. It’s director Cleo Barnard’s pacing, however, that raises this story above lesser dramas in the romance genre. She keeps everything at a low hum, only making big moments when they actually matter. Most of all, you’ll love the characters this film brings to life!

Sandie Angulo Chen: Ali & Ava is a gentle, moving British drama about two adults who form an unlikely friendship that grows into something more. Director Clio Barnard chronicles how in the working-class, ethnically diverse city of Bradford in West Yorkshire, Ava (Claire Rushbrook), a middle-aged classroom assistant and young grandmother of five, ends up meeting Ali (Adeel Akhtar), an exuberant South Asian landlord who loves punk and hip-hop. After a meet-cute, the two continue to spot each other, hang out, exchange secrets, and slowly fall for each other despite the misgivings of their bigoted (hers) and classist (his) families. Akhtar and Rushbrook make the most of their leading performances, selling the charming opposites-attract chemistry of their characters. Despite the heavy themes explored in the film, there’s real joy and authenticity to the romantic drama.

Pam Grady: Romance should not be in the cards for Pakistani-English Ali (Adeel Akhtar) and Irish-English Ava (Claire Rushbrook) in Bradford, a working-class English suburb. About the only thing they have in common is they are both middle-aged. He is not completely over his much younger wife, from whom he’s separated but with whom he still shares a flat. She is not completely over the trauma from the violence inflicted on her by her late second husband. He has no children; she’s a grandmother. Her adult son Callum (Shaun Thomas) is racist and rabidly opposed to his mother seeing a Pakistani Muslim. Ali and Ava both love music but even then, their tastes are in complete opposition. Nevertheless, instant attraction blossoms quickly into something deeper. There is absolutely nothing new in writer-director Clio Bernard’s blend of kitchen-sink drama and romance. What rescues the film from cliché are its titular characters and the actors embodying them. Ali and Ava are likeable characters, given an extra dose of charm by Akhtar’s twinkly charm and Rushbrook’s bubbly amiability. The actors’ palpable chemistry lends weight to what easily could have been a paper-thin story, making it easy to root for a happy ending for Ali and Ava.

Cate Marquis In British filmmaker Clio Barnard’s Ali & Ava, a widowed kindergarten teacher’s assistant in a working-class Northern English city meets an upbeat British-Pakistani man when he comes to pick up his niece after school and offers the teacher a ride home on that rainy day. Right away, the two hit it off, sharing a love of music – although of wildly different kinds. What starts as friendship evolves but there are many complications in the way. Among these are Ava’s (Claire Rushbrook) threatening, bigoted grown son, who lives with her along with his baby daughter. On Ali’s (Adeel Akhtar) side, there is the fact that he and his wife are separated but not divorced, something they are concealing from his family, even though they all live close by. Adeel Akhtar and Claire Rushbrook give appealing, believable and warm performances, in a heartfelt family drama inspired by real people, a tale about change and challenges that does not always color inside the lines.