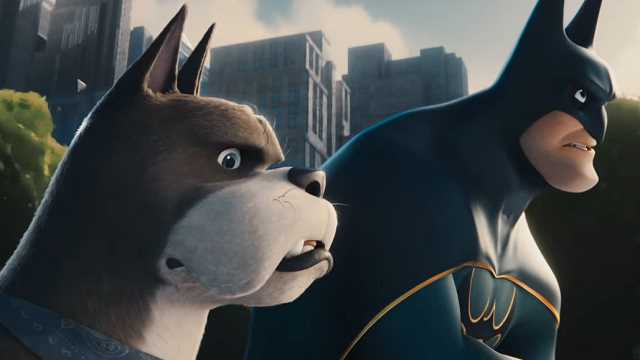 According to legend, when his home planet of Krypton was about to explode, baby Kal-El’s parents placed him in a space capsule headed for Earth. But what no one realized until now is that, just before blast-off, Kal-El’s beloved puppy, Krypto, jumped into the capsule too.

In Metropolis, Kal-El (voiced by John Krasinski) grows up to become Superman -a.k.a. Clark Kent – with faithful Krypto (voiced by Dwayne Johnson) -a.k.a. Bark Kent – always at his side. At least until, Clark’s courtship of “Daily Planet” reporter Lois Lane (voiced by Olivia Wilde) gets so serious that he’s proposing marriage.

Does that mean that Bark has lost his best friend?

Luther has obtained a meteorite of orange kryptonite, only to discover that – while it doesn’t work on humans – it has a devastating effect on animals, like Krypto.

Desperate to save his owner, Krypto recruits a team from the Tailhuggers Animal Shelter. There’s Ace (voiced by Kevin Hart), a ‘loner’ Boxer who becomes super-strong and indestructible; potbellied pig PB (voiced by Vanessa Bayer) who grows to enormous size; Chip (voiced by Diego Luna), an electrified red squirrel; and super-speedy Merton the Turtle (voiced by Natasha Lyonne).

Written by director Jared Stern (LEGO animated films) with John Whittington, this animated comic-book feature is loosely based on DC’s “Legion of Super-Pets,” which first appeared in 1962’s “Adventure Comics #293.” It’s loaded with laughs, imaginative jokes and a heartfelt life lesson about the value of friendship – and it sets up a sequel.

On the Granger Gauge of 1 to 10, DC League of Super Pets is a spirited, scrappy 7 -a good time at the movies for you and the kids – and the kid in you