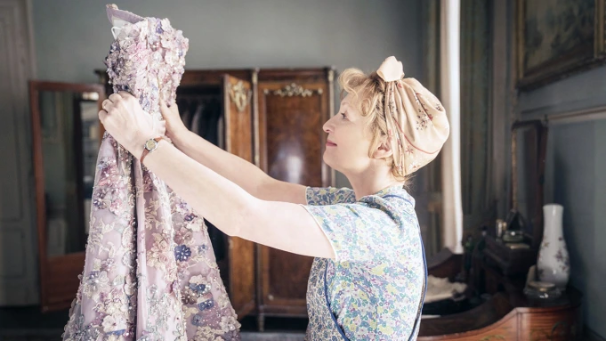 Mrs. Harris Goes to Paris seems like a sweet little movie about a sweet little charwoman. It is not. At least, that’s not all it is. The current film is an adaptation of earlier versions, and it presents, not just a woman dreaming of a Dior dress. It explores philosophy, as in Sartre and existentialism; it peers at feminism with references to the “invisible” woman; it juxtaposes lower middle class workers v. upper class twits.

Mrs. Harris dusts and Hoovers houses for a living. She cleans for a starlet, who needs her motherly support. She also cleans the house of a snooty lady who does not pay Mrs. Harris but spends outlandish amounts — 500 quid, to be exact — on a red dress. That dress changes Mrs. Harris’ life. She wants one. So she starves herself and gambles, literally. She runs into bits of good fortune. She makes it to Paris and, thence, to the House of Dior. There, she meets Mdm. Colbert, who treats her like dust. But she also meets a model who wants to be a philosopher and an accountant who has ideas for rejuvenating the House of Dior, and she meets seamstresses ripe for a strike, led by Ada Harris as Norma Rae.

“Mrs. Harris” is the latest film version of a novel, written in 1958. Mrs. ‘Arris Goes to Paris is the first of a tetralogy by Paul Gallico, who made a franchise of Mrs. Harris. Gallico was a prolific storyteller. He started as a sports writer for the New York Daily News. He wrote 41 books, plus many movie scripts and short stories (one was the basis for the musical “Carnival”). Among his better known works are “The Snow Goose” (1941), The Silent Miaow (1964), and The Poseidon Adventure (1969).

Director Anthony Fabian worked with Carroll Cartwright and Keith Thompson on the script. Mrs. Harris Goes to Paris portrays the titular cleaner as a cock-eyed optimist. Lesley Manville carries off the role with élan, her head wrapped in a kerchief like a tea cozy. Well worth watching is the great French actress Isabelle Huppert as the invisible woman behind the great man. Here, she shows herself quite capable of being a character actress.

Mrs. Harris Goes to Paris offers more than twee. Its politics are subtle but defining.