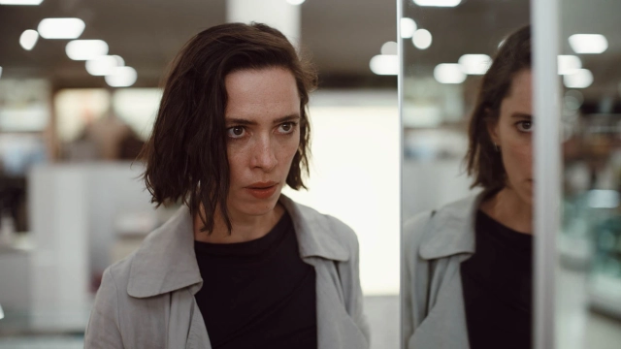 The trauma of an abusive relationship resurfaces in Resurrection, a thriller that Rebecca Hall centers with a get-under-your-skin performance, even as the film turns into bonkers territory.

Margaret (Hall), works as a biotech executive, discussing clinical data with precision. She wears tasteful, tailored suits, fixes her appearance just so, and calls up a married co-worker for regular no-strings-attached sex. The only ripples in her well-calibrated life come from her college-bound daughter, Abbie (Grace Kaufman, The Sky Is Everywhere), whom she’s raised alone.

Margaret gazes at Abbie a bit too intently for comfort, saying things like she’ll kill anyone who harms as much as a hair on the girl’s head. These statements, Abbie says, are more for her mother’s benefit than her own.

Writer-director Andrew Semans (Nancy, Please) takes his time before revealing what spurred Margaret to project such strength and control. One day at a medical conference, Margaret glimpses her old boyfriend, David (Tim Roth, Sundown), seated across the room, and memories of their relationship send her racing outside, shaking and gasping for air.

Resurrection doesn’t explain why David has dropped back into Margaret’s life after more than twenty years or how he knows so much about her life now. For a while, the film makes us wonder whether he’s real or just a memory resurfaced from the stress of Abbie’s impending departure.

Hall, who made her directorial debut with 2021’s Passing, has played several women whose sanity frays as their realities fracture (The Night House, The Gift, Christine). She shows Margaret’s obvious jitters but impresses most in less-showy scenes, such as a lengthy monologue late at night where she describes meeting David, what their relationship was like, and the guilt she carries about leaving him. Semans frames her in a medium shot without cutting away, a rare revelation from this guarded woman, and Hall holds the screen.

As David, Roth has a calm and precise delivery, speaking of “kindnesses” that Margaret used to do for him and that he requires again. Margaret threatens to kill him, but he doesn’t believe she has it in her, and she grows angrier at herself and more unhinged as she recognizes the young, frightened woman she used to be.

For a while, Resurrection lives in that relatable, uneasy space when something reminds us of a version of ourselves we thought we’d outgrown. Yet this is not a subtle film, with a score by Jim Williams (Titane) that leans heavily on the strings, and David’s hold over Margaret that might or might not be metaphorical. The gory climax either answers that question or leaves viewers wondering what they’ve just watched—and if the running time was worth the trouble.