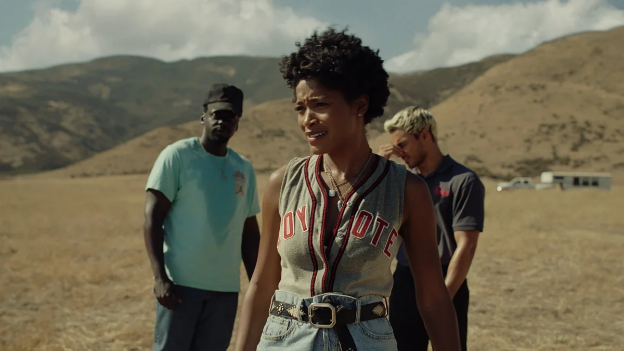 Frist thing you should know is that the title is an acronym of Not Of Planet Earth, which foreshadows filmmaker Jordan Peale’s elusive concept of alien visitation.

After huge success with Get Out followed by Us, Jordan Peale tackles a sci-fi/Western/horror story, set in Southern California’s picturesque Agua Dulce, where stoic Otis “O.J.” Haywood Jr. (Daniel Kaluuya) and his volatile younger sister Emerald (Keke Palmer) are trying to continue a family tradition.

Most people don’t realize that the first film ever made – Eadweard Maybridge’s 1878 The Horse in Motion – featured an unidentified Black jockey, a Haywood ancestor. These Haywoods are experienced horse wranglers, supplying animals to TV and movie companies. But ever since their father (Keith David) died, the legacy of Haywood’s Hollywood Horses has declined.

Then O.J. and Em spot a menacing, disc-shaped UFO, hovering in and out of a cloud above their ranch, spooking the horses.

But then there’s the mysterious disappearance of the entire audience at a nearby Wild West theme park run by geeky Ricky “Jupe” Park (Steven Yeun), a former child actor whose sit-com career abruptly ended with a chimpanzee disaster. Was Jupe’s audience abducted by the UFO?

Writer/director/producer Jordan Peale is a bit too subtle this time because, while there’s plenty of tension, often evoked by Hoyte Van Hoytema’s striking cinematography and Michael Abels’ score, the stakes are pretty low.

And since we’re not emotionally involved (because the characters are not fleshed out), the payoff is minimal – in contrast with Steven Spielberg’s classic Close Encounters of a Third Kind – or M. Night Shyamalan’s thrillers. Plus, many scenes go on far too long, and it’s sometimes difficult to decipher what fast-talking Keke Palmer is saying and/or screaming. Is that intentional or a just unfortunate?

On the Granger Gauge of 1 to 10, Nope is a suspenseful, supernatural 6, playing in theaters.