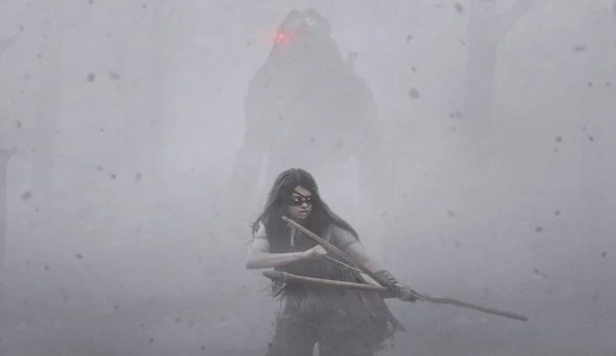 It has been 35 years since the original sci-fi action thriller Predator (1987) was released – and Prey is a worthy complement to the franchise.

Set in 1719 in the Comanche Nation on the rugged Northern Great Plains, the story revolves around wannabe warrior Naru (Amber Midthunder), who is determined to be recognized by her tribe as a hunter – like her skeptical older brother Taabe (Dakota Beavers).

“Why do you want to hunt?” inquires her mother. “Because you all think I can’t,” Naru replies.

She gets her chance when a hunting party in pursuit of a mountain lion encounters a far more elusive and dangerous beast (former professional basketball player Dane Diliegro), a huge extraterrestrial who can make himself invisible.

“Something scared off that lion,” observant Naru notes, repeating the original film’s best lines: “If it bleeds, we can kill it.”

Determined to confront the Predator, fearless Naru, accompanied by her dog Sarii and armed only with her sharpened tomahawk, goes into ruthless pursuit, following a trail that will lead her into dangerous quicksand and capture by villainous French fur trappers, wielding muskets.

FYI: If 25 year-old Amber Midthunder looks familiar, perhaps you saw her with Liam Neeson in The Ice Road (2021).

On the Granger Gauge of 1 to 10, Prey is a suspenseful, scary 7, streaming on Hulu & Disney+