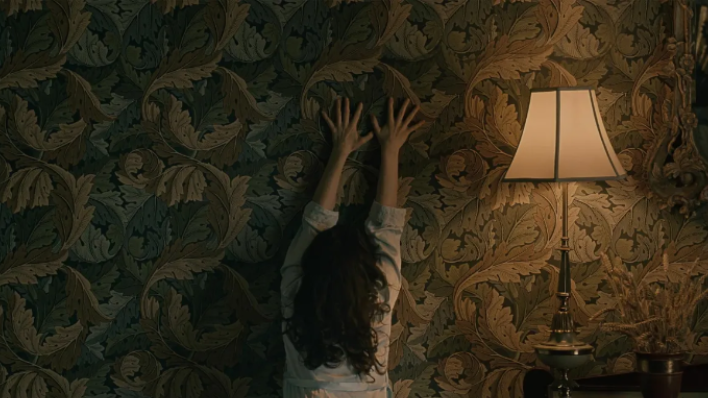 One of the best shorts collections at the Fantasia International Film Festival is the annual Born Of Woman program. This year’s selections ran to a sold out audience. The Born Of Woman selection is special because the films are bold genre stories created exclusively by female filmmakers. 2022’s iteration saw nine films from five countries and every single one blew me away. Each year, this is my personal favorite program. The films are fresh, vibrant, scary, relatable, and wildly intriguing.

A shocking opening leads to one of the sharpest takedowns of the patriarchy I’ve seen in quite some time. Lily receives a therapeutic mirror allowing her to take back the power so freely stolen by men. The depiction of the erasure of women is a comic and creative chef’s kiss. I didn’t think it was possible to make misogyny funny, but the script is carefully crafted. I found myself nodding, laughing, and exclaiming, “This is sheer perfection.” Highlighting women going to bat for other women and the fragility of the white man, Lily’s Mirror could easily be an entire series or feature film. This type of short drives audiences wild, and Fantasia 2022 knew what they were doing programming this film. A slow, celebratory clap for everyone involved.

Everybody Goes to The Hospital

This haunting stop-motion animation speaks to the often barbaric side of medicine. Fear, misogyny, and the medical staff’s good complex are all in full view. While the story occurred in the 60s, its relevance does not wane. Writer-director Tiffany Kimmel does an excellent job capturing the terror of a child that undoubtedly attached itself to adulthood. The narration from Lucia Hadley Wheeler hits you square in the heart. The short was surprisingly personal for me. When I was 20, doctors at Saint Luke’s Roosevelt subjected me to a battery of invasive tests, unconvinced that I was a virgin. What I knew was appendicitis was treated as an STD. After 12 hrs and an emergency surgery later, my medical gaslighting experience still haunts me. Fantastic 2022 audiences will watch in awe of the artistry and storytelling style. Everybody Goes To The Hospital will make your blood run cold.

Writer-director Tipper Newton gives us a glorious, tongue-in-cheek, neo-noir throwback. Daniel makes a dating tape, and his first date brings nothing but good trouble. I’m not sure if Wild Card was shot on 16mm, but the combination of costumes, sets, and score give the film’s overall aesthetic an era legit look. Fantasia 2022 viewers got an excellent treatment in Wild Card. When the credits rolled, I was left wanting to know what happened to Daniel. I needed to know what happened to Daniel! Billy Flynn and Newton give great performances. I cannot stress how perfect they are for these roles. The subtle nuance between them walks a fine line between serious and absurd. Overall, I’m beyond thrilled to follow Wild Card‘s journey.

A young woman recovering from surgery works the night shift as a bartender and contends with the memories of her surroundings. Horror doesn’t have to be a creature feature in the traditional sense. Punch Drunk is a creative declaration of power. Writers Cason Weiss and Emily Lerer (who also directs) bring a uniquely intimate short to Fantasia 2022. Danielle Argyros is stunning in the lead role. I would love to see this developed into something bigger. It has endless potential. Punch Drunk is a bold, fearless, funny, and relatable look at the trauma that sent a shiver down my spine.

A mesmerizing juxtaposition of live action and 2D animation, Stained Skin uses fable storytelling to ease the reality of women stuck in an endless work cycle. Attempting to combat their sadness, the story passes from Samy to Alba as a coping mechanism. As screenwriter Mirjam Khera’s narrative grows, so too does their sense of hope. Marisa Wojtkowiak and Safinaz Sattar are captivating in the eight minutes they share alongside beautifully drawn images from Andrei Ebîncā. Directors Adam Graf and Mandy Peterat understand the balance of dark and light. It’s films like these that bring Fantasia audiences to Born of Woman. Stained Skin is a gorgeous addition to 2022.

Writer-director Elisa Puerto Aubel gives Fantasia 2022 audiences a heart-stopping short. In the near future, a refugee and her infant daughter must negotiate with a customs AI. As the seconds dwindle toward one of two options, tension is palpable. The sparse and ominous set adds to the suffocating feeling, and the desperation in actress Irene Anula’s voice against the callous echoes of the machine will take your breath away.

A young mother brings her baby Iris to participate in a traditional ritual. Generations of women trek into the forest, but Clara is unsettled and guilt-ridden, having missed her grandmother’s recent passing. Written by Karen Acosta, Naria Muñoz, and director Faride Schroeder, Daughters of Witches is another excellent example of the intrigue a short can generate. As night breaks into dawn and Clara finds Iris crying in another location, the final reveal left me emotionally invested in each character of this family lineage. Starring Yalitza Aparicio (ROMA), Daughters of Witches builds an engrossing world in ten minutes.

Don’t Go Where I Can’t Find You

This intoxicating short film from writer-director Rioghnach Ni Ghrioghair teases every one of your senses. Margaret has lost her lover Freya to something she believed was haunting them inside the walls of their expansive Victorian mansion. Capturing Freya’s presence becomes an obsession, compromising her relationships with the living and the dead. Garrett Sholdice and Benedict Schlepper-Connolly’s score becomes a plot point. Truthfully, the sound design from Garret Farrell is one of the most impactful aspects of the story. The film’s audio consumes the viewer, placing them in the stranglehold of grief. Fantasia 2022 audiences will undoubtedly fall in love with this film, from its costumes to Allyn Quigley’s editing. It’s nothing short of sumptuous.

Striking cinematography by Marc Patterson and a dissonant score from Jonathan Keith set the scene for director Sarah Gross’ Fantasia 2022 short film Kin. Three siblings must survive the western plains on their own. Eldest sister Ida takes the familial reigns to protect everyone. Madison Tebbutt’s screenplay subverts expectations bringing us an unusual creature feature that twists and turns from beginning to end. The final shot made me shudder.