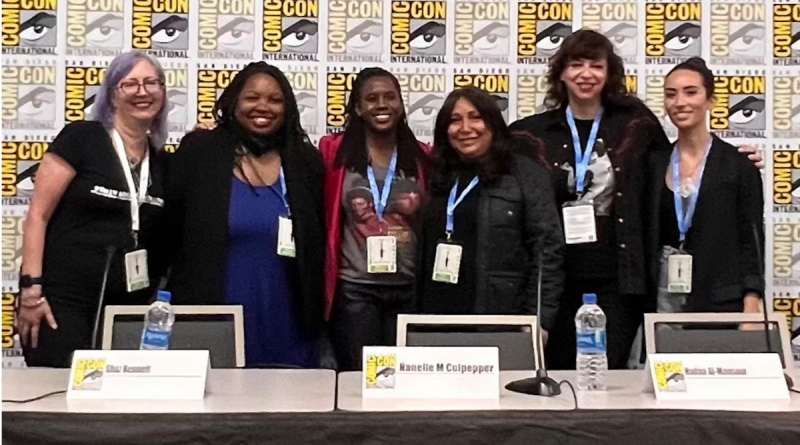 It’s very strange and a little disconcerting that five months of work is distilled into a panel event that takes less than an hour, but that’s how it goes planning the Women Rocking Hollywood panel for San Diego Comic-Con every year. What borders on surreal is that in 2022, I was working around an ongoing pandemic to do so. In some ways, 2022 was the best event yet, this being the seventh year of the female filmmaker-focused panel. The seven years includes the last two, in which we showed up virtually. Although there were some challenges unique to 2022, “Women Rocking Hollywood: Multi-hyphenate Female Filmmakers” as this permutation was called, featured several exclusive reveals, as well as a worldwide exclusive clip presented by the women participants, and that made this SDCC particularly special.

It feels like there are panels and summits and discussions happening all over the place that highlight female filmmakers, but I pitched Women Rocking Hollywood back in 2016, when that was far from the case. The only panel with any juice was Women Who Kick Ass, which was sponsored by Entertainment Weekly and featured female stars of action and sci-fi movies and tv shows. I’d seen the panel. The questions, though asked by one of the rare female moderators at the Con, were often focused on things like “How do you feel about your costume?” and “What’s it like having to learn stunt moves?” I was impressed by how the panelists would handle questions like that. One time Kristin Kreuk pivoted from a particularly shallow question to talk about parity for female filmmakers, the importance of sisterhood among female performers, and why there should be more diversity in female action leads. I had been going to SDCC for 15 years and conducting panels on animation and film for over 10 years at that point, and knew how to organize panels there.

I also respected the Comic-Con International company, which is one of the only non-profit comic-cons in the world. That makes the SDCC experience far more egalitarian than others like D23, where money can buy you a better or confirmed spot at a panel, or early access to the exhibitors floor. At SDCC, no matter how rich they are, attendees have to sleep outside overnight to get into the fabled Hall H, the biggest space at the Con, where the feature film and Marvel events happen, and nearly all the announcements the press covers take place.

Though in the early years of my attendance there were very few women attending, on panels, or representing retailers on the exhibitors floor, that was changing. It was time for more female moderators, more women on panels, more panels that spoke to female fans, and more panels representing women behind the camera and below the line.

I pitched my first WRH for 2016. It got accepted. Huzzah! Out of many thousands of pitched panels, only a few hundred are accepted. The next step was finding a sponsor to pay for at least part of travel and accommodations for the panelists. The studios wouldn’t pay to send the few female filmmakers on their roster to SDCC, and honestly, still don’t.

After that, I had to track down every woman directing, producing, and/or writing for con-centric projects, and beg their managers, PR representatives, or agents to allow them on my panel. Over the years, I’ve proved myself. In 2016, Catherine Hardwicke (box office record-breaking director of Twilight), Deborah Snyder (producer of Wonder Woman and Justice League), Angela Robinson (writer/director of Professor Marston and the Wonder Women) and Victoria Alonso (executive producer of Doctor Strange and Captain America: Civil War) talked about their experiences, with statistics and issues important to film professionals and fans alike brought up by Women in Film: LA’s executive director Kirsten Schaffer. It was a huge success. We had a tiny room, but it was not only filled, hundreds of interested attendees were lined up outside, but couldn’t get in.

Over the years, I’ve proved myself enough that some fairly well-known PR specialists and managers know me and are willing to tell those they represent that taking part is worth their while. Every subsequent year, OWN has sent two panelists from Queen Sugar, a show that, in the seven years it has aired, has hired only female filmmakers. We’ve had some great filmmakers, including Liesl Tommy (Respect, The Walking Dead) Rosemary Rodriguez (Jessica Jones, Peacemaker) and Regina King pre-One Night in Miami, before people knew her as a director. In fact, Regina’s manager kindly called me to let me know Women Who Kick Ass wanted her to discuss her role in The Watchmen on their Hall H panel. He asked if that was ok with me. “Of course! Any opportunity for amplification!”, I said, then added, “but let’s get Entertainment Weekly to pay for her travel and hotel.” He related that ET didn’t pay for panelists, but only included those already attending the Con. In 2022, they changed the name to Bold School, and I’m happy to say the last few years they have been much better about the direction of inquiry, and how they position the panelists. We need all the good female moderators and panels promoting women we can get!

We discovered pretty early on that this year SDCC would be live and in person, with mask mandates in place regardless of how few cases of Covid were reported. I started in March, researching and pitching for panelists. My own requirement is to have as many women of color represented as possible. I’m grateful WIF: LA and ReFrame, a non-profit initiative started by WIF and Sundance working to make the screen industries more gender-representative, raise awareness of female filmmakers of color. They help every year, when I’m trying to contact someone who doesn’t yet have a PR person or is on a show that doesn’t promote their filmmakers, they always bridge the gap. I knew all the panelists that would be on WRH would be multi-hyphenates, something many women in the film industry have discovered is essential to getting projects made, and to prptect their visions from inception to the day of release.

This year, I went through more potential panelists and challenges on my way to my final roster than ever before. That’s not to say those on this year’s panel weren’t the highest caliber. I wound up with an amazing lineup! The problem was I work to keep the list balanced, and folks kept dropping off because of Covid production re-scheduling. Others didn’t want to risk getting sick once the numbers went back up with the BA-5 Variant. Two of my panelists either had to reshoot until the day of, or had to fly from far away because their schedules had changed. Two of them were filming until the last minute and had to fly back out right after the panel. Still, they not only committed, but brought exciting announcements and images or clips to enhance the event.

The Friday afternoon before the panel, we were able to go to the IMDboat, which is anchored in the harbor behind the convention center. A special invitation is required, and photos are taken of all who climb aboard. Those photos are immediately put onto IMDb, adding credits to the records for each attendee. They even took photos of me! Our time there was limited though, because of Covid protocols. We were lucky to be part of it.

The panel happened on Saturday, July 23rd, at 10:30am, one of the first panels of the day. This created other challenges. Haifaa Al Mansour was flying from New Orleans, where she is filming The Mayfair Witches, and would land less than an hour before the panel. With Covid protocols and tight security in place, entrances to the Con were jammed up and running behind. Haifaa landed on time, and we got through security through sheer tenacity and advanced planning. While I had a backup plan, and the contact number for head of Con logistics, our potential attendees weren’t so lucky. Many were trapped in lines outside. As a result, instead of nearly a thousand people waiting in line as we had every other year when our panel was at 2pm, the room was far from full at the start. By the end of the presentation it was near capacity, but I did wish the panelists who went to such effort would have gotten the same level of love and adoration as shown others in previous years. It’s not something they experience regularly, seeing aspiring female filmmakers celebrate them with a standing ovation. Still, the feeling of sisterhood remained, and all spoke eloquently and with the infectious spirit of those who love their craft. The panel ended with enthusiastic reactions from our audience, if not the thunderous applause and standing ovation of former years. Some highlights:

Every year I say this panel is like childbirth. Every year I say I’ll never do it again, because it’s so difficult and stressful on the way to the 50 minutes at SDCC which go by in a flash. Then I see the faces of these women who work so hard and love their calling as directors so much, and I remember why I do it, and set aside all the difficulties and unpleasantness.

EDITOR’S NOTE: You can view the video recording of the panel on Leslie Combemale’s Cinema Siren Youtube channel. Though the video doesn’t include the exclusive clips, the passion of the Women Rocking Hollywood panelists definitely conveys. Many of the women and girls who didn’t make it to SDCC this year will be able to see WRH that way.