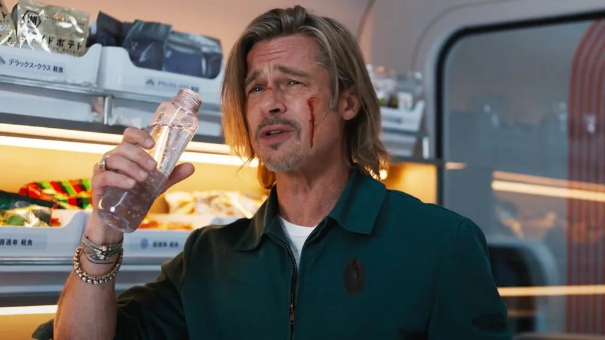 Bullet Train may not be the worst picture of 2022 – but it’s gonna come close!

The chaotic, confusing, supposedly comedic action begins with Kimura (Andrew Koji), a distraught father, standing over the Tokyo hospital bed in which his young son lies – after being pushed from the roof of a building. The boy’s disapproving grandfather, known as The Elder (Hiroyuki Sanada), orders Kimura to find the culprit, take revenge and restore the family’s honor.

Meanwhile, there’s this low-level crook, known as Ladybug (Brad Pitt), who’s obviously deep into psychobabble. He’s ordered by his handler (voiced by Sandra Bullock) to retrieve a silver briefcase from the Japanese bullet train that speeds from Tokyo-to-Kyoto.

Problem is: two incomprehensibly mumbling British assassins – ‘brothers’ Tangerine (Aaron Taylor-Johnson) and Lemon (Brian Tyree Henry) – are after the same briefcase. Plus there’s the stealthy Hornet (Zazie Beetz), who poisoned the bride and family of The Wolf (Benito A. Martinez Ocasio – a.k.a. rapper Bad Bunny) at their wedding banquet in Mexico.

Complicating matters further is The Prince (Joey King), a sneaky second-generation killer who looks like an innocent schoolgirl. At the end of the line awaits White Death (Michael Shannon), a Russian underworld kingpin with a handful of hitmen.

Adding to the carnage confusion, there’s an uncredited cameo from Channing Tatum as a crook who was supposed to take Ladybug’s assignment – along with a slithering poisonous snake that escaped from the zoo.

At one point, Ladybug says, “I just want to get off this train and go to a Zen garden.” Me, too!

On the Granger Gauge of 1 to 10, Bullet Train is a tediously boring 2 – an awful waste of 2 hours, 6 minutes, even if the theater was deliciously air-conditioned – and empty!