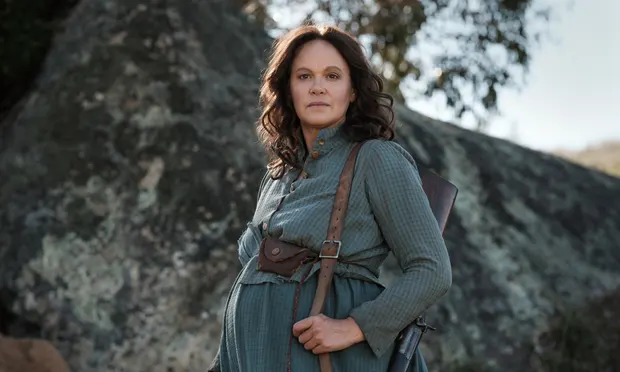 The British Empire’s predisposition towards the planting of flags in other people’s living rooms fomented quite a few parallels in world history. One of those lies in the colonization of the American Frontier and that of the Australian Bush. The seizing of lands, the vilification of the Indigenous populations, and the culture of violence that was prevalent beneath a thin veneer of religion were wrought by men who called themselves pioneers. On paper, other than through the uniquely different accents, it is difficult to tell the two apart (this is sarcasm and yet it is also the truth). These parallels are what make the Western such an apt genre for presenting a story about 1893 Australia, but when those wild “western” lands are pitched as a metaphor for Aboriginal Australians and untamed womanhood the genre takes a turn. In a weighty tall tale that rings too true, writer, director, and leading lady, Leah Purcell spins this POV into a new perspective. The weighty and sparingly shot, The Legend of Molly Johnson is not so much an ode but a lamentation, part thriller, part commentary, and harsh to its bones. At its center is a woman who survives abuse and isolation for the sake of her four children but is tested by the laws of colonizers and her own disposition towards both benevolence and bullets. The acting is winning, as are the trials and judgments on the characters face. This one is going to hurt but don’t flinch because no part of it should be missed.