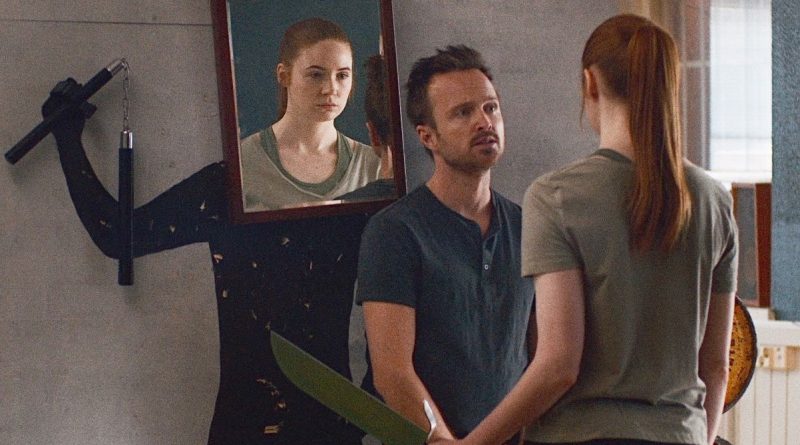 Coming on the back of celebrated indie black comedies Faults (2014) and The Art of Self-Defense (2019), in Dual, Riley Stearns takes his charmingly twisted dark sense of humor and turns this time towards a science fiction premise. Premiering at Sundance and now playing at the Melbourne International Film Festival, at the film’s core lies that good old fashioned science fiction chestnut “just because you can doesn’t mean you should” when it comes to technological progress. But, of course, being a Stearns film the way science fiction manifests is notably without the whistles and bells so typical of the genre elsewhere. Rather, the basic premise – that we can pay to replace ourselves with genetically engineered doubles when we die to help assuage the pain and grief of our family and friends – comes into view almost matter-of-factly. Here, it is the tension between the film’s main character and her “replacement” that drives the narrative.

That character is Sarah (Karen Gillan), who lives a fairly dull life with her boyfriend and overbearing mother. When a doctor tells her she is dying and does not have long to live, she decides to buy a clone. The twist comes, however, when Sarah’s disease goes into remission, and as is legally required, she must have a televised, public duel to the death with her double to decide which of the two Sarahs will survive. That her boyfriend and mother seem to like her doppelganger more than they like her (the clone also has less cellulite), Sarah joins forces with a specialist personal trainer whose job it is to prepare the woman for the battle of her life.

The consciously awkward world building of Stearns’s films will either charm or irk, and the deliberately stulted, oddly formal style of dialogue similarly will either appeal or dismay. There’s thus something audacious about Stearns’s films and their brazen determination to be their own thing – this is no cookie cutter indie darling happy to roll films off the production line. For those of us for whom Stearns long ago won over, Dual is a satisfying ride that – while wandering into generic territory that is relatively new for him – shares his fascination with ritual and themes of individuality, connection and disconnection.