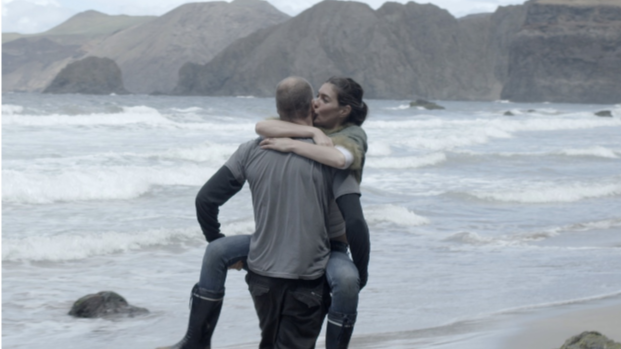 Getting there is, as they say, half the fun.

Unless — and until — you get there, only to ask yourself, “Was this trip really necessary?”

No doubt the answer was a hearty “yes” for Dominique Braun and Terrence Martin, the married couple who write, direct and star in Get Away If You Can.

For at least some of us in the audience, however, the answer proves to be “not so much.”

It’s one of those maddening movies that never quite figures out what it wants to be.

Sometimes it’s a relationship drama. Sometimes it’s a study of how family influences — good and bad — impact the relationship in question. It tries, in hit-or-miss fashion, to generate gripping psychological tension. And, in its heart of hearts, it wants to be a made-for-each-other, find-your-own-paradise romance.

Lofty goals for any movie, let alone one with a running time under 90 minutes. But Get Away If You Can deserves points for trying to live up to its ambiguous title.
The movie dives into its central conflict from the start, contrasting two uneasy riders sharing the same sailboat: spouses Domi (Braun) and TJ (Martin).

She’s a free-spirited artist from Argentina, who wants to escape confinement — both physical and psychological — by exploring the nearby Islands of Despair.
He’s a by-the-book American, the son of a successful Southern California entrepreneur, who wants to sail to an island — but not the portentously titled ones in sight.

“We can’t stop at the Islands of Despair,” he argues. “I made a plan” — to anchor at a different island where he can surf and she can scuba dive — “and we stick to the plan.”
But that’s TJ’s plan. Domi’s plan: sneak off the boat, row ashore and get away from her overbearing husband as soon as possible Domi and TJ might seem alone, surrounded by stormy seas. But they have company just the same. For Domi, it’s her sympathetic sister (Martina Gusman) who wants Domi to come home to Argentina. For TJ, it’s his domineering father (Ed Harris), who wants TJ to take over his business — and eliminate the threat Domi poses to the future he’s planned for his son.

“In the boat, there’s one captain,” the pushy papa lectures his son. “It’s essential this woman knows her place.” And if she doesn’t? That’s easy: “Just throw her overboard.”

By interweaving past and present and shifting between home-and-away settings, Get Away If You Can tries mightily to establish the sources of Domi and TJ’s strife.
But there’s a crucial gap in our knowledge: how, and why, Domi and TJ became a couple in the first place. The source and depth of their connection remains elusive, thereby undercutting the movie’s emotional impact.

Little wonder, then, that Get Away If You Can can’t escape its pivotal problem: the movie’s most compelling character isn’t Domi or TJ but TJ’s blustery father.
It’s a role the flinty Harris could play in his sleep. He has too much intensity — and integrity — for that, of course, but he can’t help dominate the movie the way his character tries to dominate his son.

And all the postcard-pretty vistas and achingly earnest emotion in the world can’t change that.