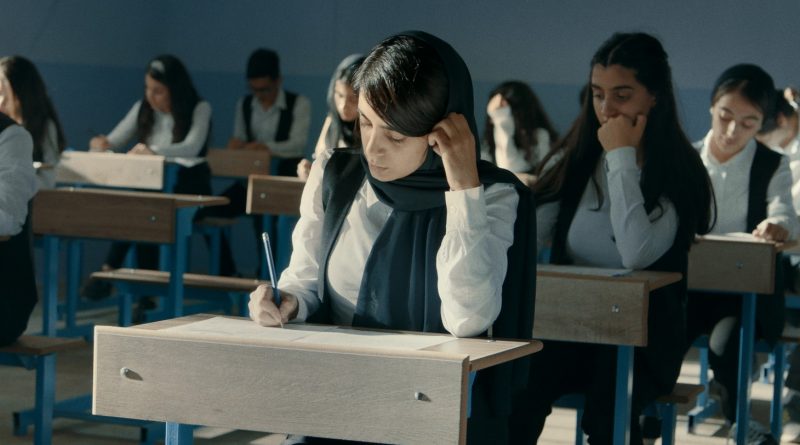 The city of Sulaymaniyah sits close the Iraqi border with Iran, nestled in the Kurdistan region. The University of Sulaymaniyah opened in 1968, and while neither it nor any other tertiary educational institution are mentioned by name, these bastions of higher learning play an integral role in Kurdish director Shawkat Amin Korki’s unflinching feature, The Exam. Winning the FIPRESCI Prize at Karlovy Vary in 2021, the film packs an enormous punch by combining a probing examination of gender politics with the high-octane thrills of what ultimately feels like a heist movie. Greater than the sum of its parts, The Exam is riveting stuff.

The film follows a young broken-hearted teenage girl called Rojin (Vania Salar), mourning her lost love who mysteriously disappeared two years earlier. In her father’s eyes, social norms and mores and his own desire to wed now position Rojin in the seemingly inescapable position of being wedded off in an arranged marriage. But her older, deeply protective sister Shilan (Avan Jamal) has other ideas. Determined her little sister not end up in the same situation as her – married to a brutish man with a young child in a relationship where physical, emotional and sexual violence feel like they are all about to explode – Shilan knows that if Rojin can pass her exams and get into university, a better life than the one Shilan has is possible. The catch? Rojin is hardly a star student, and thus the crime thriller component that drives the plot comes into play. Through the dubious criminal services offered by the enigmatically named Mr Engineer (Hushyar Nerwayi), Shilan can use Bluetooth technology to help Rojin cheat and pass her exams with flying colors. But things don’t go as smoothly as Shilan had hoped.

With The Exam, director Shawkat Amin Korki tightly binds a fearless examination of the plight of women in this region with enough familiar genre film thrills to keep the audience enthralled. At the core of the film lie the powerful performances of Vania Salar and Hama Rashid Haras as the two sisters (both actors making their impressive screen debuts here). Similarly, cinematographer Abid Sobhani’s kinetic, nervous camera work also does much of the heavy lifting when it comes to setting mood and tone, keeping us on the edge of our seats. If the plot doesn’t sound gripping, think again; The Exam is a treasure just waiting to be discovered.