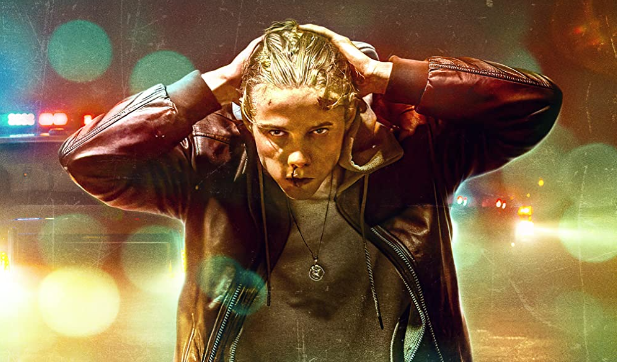 The Runner is a complicated undertaking, seemingly unsure if it’s an action thriller, coming of age movie, cautionary tale about drugs or love story.

You could consider it four movies for the price of one, but probably only if you were Pollyanna.

This is no surprise, given that the director is well-known acting coach Michelle Danner.

Comparative newcomer Edouard Philipponnat (glimpsed in House of Gucci and soon to be seen in Ridley Scott’s Napoleon) stars as Aiden, a drug-addled high school rich kid busy wasting his time and his life.

Aiden sells drugs, too, with his buddy Blake (Nadji Jeter, a standout here) but he is unpleasantly surprised to come to the attention of the authorities.

He’s busted by an ambitious cop (Cameron Douglas, making the best of an underwritten role) and told he’ll just need to do a little work for the police to get his life back.

What he has to do is help them get a big-time dealer called Local Legend (Eric Balfour, TV’s The Offer) by wearing a wire and recording a drug deal.

This assignment hangs heavy on Aiden.

His life is a mess. He’s at odds with his mother. He has ruined a relationship with the girl he truly loves (Kerri Medders). He’s a keen runner but he may be cut from the team for skipping school.

In various flashbacks he’s seen to be smiley and hopeful, so the terrible toll of drug use is underlined and kind of with a Sharpie. But never mind.

Most of the cop scenes in The Runner play like an episode of CSI, and not in a good way, but about halfway through the plot starts to thicken in a satisfying way. Aiden throws a huge party at which to lure in the kingpin drug dealer, and the action picks up accordingly.

Writer Jason Chase Terrell wants all loose ends tied in a bow, so the movie runs a little long.

This is a rich-kid-smartens-up story that is said to be very personal — and, according to IMDB, is aimed at shedding light on the terrible tragedy that is youth who are lost in the war on the drugs.

The script is ambitious but never gets far beneath the surface of anything and never presents the characters with enough to do or say.

It’s a shame, because The Runner has a solid cast.