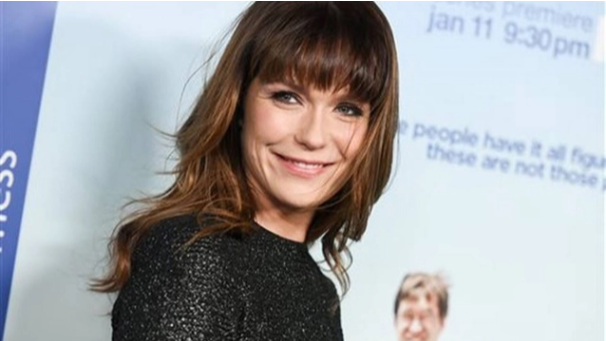 Katie Aselton is the director of the body-switching comedy Mack & Rita, about a 30-year-old who wishes she was 70 and is somehow transformed into Diane Keaton. In an interview she talked about how old she feels, directing Keaton (who played her mother in the film, Book Club), and why her favorite part of making movies is collaboration.

Nell Minow: How old do you feel inside? Katie Aselton: I have to be honest, after a week of press, I feel like I’m 95. My mom said this great thing years ago, which was so funny. She was probably close to 60, but she was speaking about someone else. She said, “You know, she’s probably around my age. She’s like 35 or 40.” And I feel like if I could like land there where spiritually I always feel like right around 40, I think that would be pretty nice.

NM: You have worked with Diane Keaton as an actress. Tell me about working with her as a director.

KA: For me, as a young girl from a small town in Maine who grew up idolizing and admiring and really looking to Diane as the true touchstone, working with her as an actress was a dream come true. And after that happened, I was like, “Maybe I can retire.” Then to get to work with her as a director — the amazing thing about Diane is I was very prepared for her as an actor, as established and as accomplished as she is, I just assumed that she would come in and have an idea of what she was going to do and she was going to do it, and really anything I said was just going to fall to the wayside. And it wasn’t that way at all. She was incredibly open, and game, and just willing to try things and go places and give me different takes and different approaches. And it was just truly beyond her legend, the legend of Diane. Working with an actor who is that open and amenable is incredible. NM: Elizabeth Lail, who plays the younger version of the character did a very good job of indicating without overdoing, without imitating, the vocal mannerisms and physicality of Diane Keaton. How did they work together to essentially become the same person?

KA: This is really a testament to Elizabeth’s incredible talent because that was the goal. I looked at a lot of tapes with a lot of women who gave me their best Diane Keaton impression, and that wasn’t what I wanted. I really wanted to feel a spiritual connection between them. It was all in the mannerisms, the speech patterns. And that was all the work for Elizabeth to figure out what that was. But because of COVID, we had no rehearsal time. They did not even meet until well into filming because there were regulations of who could be on set and when they could be on set. And they’re never in the same scene. So, when they met, it was actually on a day where Diane was scheduled in the morning and Elizabeth was scheduled in the afternoon, and we just worked it out so we could have them meet in passing. We gave Elizabeth dailies to look at the footage with Diane that we had shot already. And then knowing just everything that Diane gives us as the audience, all those things, those are so just authentically through and through — those are Diane and who she is. So, even to look back at past movies, her mannerisms are all very consistent and familiar. So, I think Elizabeth had a great time doing what Diane does.

NM: The costume design is important in the film. What story was the wardrobe telling?

KA: I think visually it was very fun to use the costumes to tell the story along with what was happening in the dialogue. So, the character Mack, in her 30s is scared to take any chances, and she doesn’t want to push any envelope or get too edgy. She also doesn’t really connect with the trends. She doesn’t feel confident in herself to take any big swing swings stylistically so she starts very bland and very average. When she turns into Rita, her sense of self becomes very evident, and that is shown in the choices that she’s making. And we see that in her clothes, in the color, the textures, the patterns. And then we also see it production design-wise. Her apartment is becoming a lot more colorful and a lot more playful. She’s letting her Rita sensibilities really shine.

NM: You really knocked it out of the park with your casting. One of my favorites is Taylour Paige, who plays Mack’s best friend.

KA: The Carla character is the true ride-or-die companion. She is the friend who sees Mack for who she truly is, never asked her to be anyone else, who’s always loved exactly who she is. And I think one of the things that you get with Taylour is this very true authenticity. And that was a fun way of casting this. This was less about who gave me the perfect read, and it was more about who had the right levels of personality to fill these roles.

NM: What have you learned as an actor that informs the way that you direct?

KA: I love the collaboration. As an actor, as an artist, that is what I really try and emphasize the most when we’re working. I love to have everything to be a conversation. I have no interest in being the director who comes on set is like, “This is exactly how it’s going to look. This is how the scene is going to play. You’re going to say the line just like this.”

And, honestly, this runs the gamut from actors, to crew, to everyone, to writers. I want everyone’s voice to be heard. Not in a way of too many cooks in a kitchen type of way. But the beautiful thing about actors is that everyone has an individual take on who they think their character is and what they can bring to it. And my job as a director is to elevate that and let that shine. And the same goes as you look at your crew. And you want your cinematographer to have their stamp on it, and you want the costume designer to have their stamp on it.

I know that there are some directors who are very specific and very restrictive in the freedoms that you’re allowed to take with each of your roles in making a movie. But as an actor, I want to be treated with the respect for what I bring to set, and I want to feel valued and appreciated for the things that make me uniquely me. And that is what I want to find in each one of my actors and everyone I collaborate with. I want to find the things that make them, them. And there’s a reason why I chose them to work with. And if you can allow people to be their best selves, I think you’re going to get the best product in the end. NM: This is a very different tone from your previous film (Black Rock, 2012), with a heightened fantasy element. What was that adjustment like?

KA: I took a long break after Black Rock. I took ten years between Black Rock and Mack & Rita. And I thought a lot about why I took so long, and always I would say to myself, “I just want to make sure that I’m telling the right story for the right reason.” And I think it was because to sit with Black Rock for two years, to sit with any movie from the very iteration of the thought to today, on the eve of this movie coming out in theaters, you really have to have such a deep love, passion and compassion for your project. A movie like Black Rock that dealt with sexual assault and murder and survival — it was brutal. It was so truly, truly hard, emotionally and spiritually.

Filmmaking was like a side hustle where I focused on my acting career but I also got to really think about and take the time to decide what I wanted to throw my complete self into the next time. And really it wasn’t until this script came along that had a message that I truly love so much and that really deeply resonated with me. The idea of having it all wrapped up in a comedy felt so good, particularly in the world that we’re living in right now. So, it was really with this movie that I was like, “I’m ready to dive back in.” And I’m so glad I did.

NM: What’s the best advice you have received about directing? KA: “Admit when you don’t know something.” It does not mean that you are stupid. It means that you believe in the people around you. So, you say, “I don’t know. What do you think?” or “I don’t know. Let’s look into that.” I think pretending that you know something that you don’t know is going to be the quickest way to get yourself in trouble. So, admit your limitations and know that that is not going to be a hindrance. I think it’s also it’s endearing to the people around you to know that we’re all figuring this out and no one has all the answers, but we’re definitely all on the team to figure out what the answers are together.