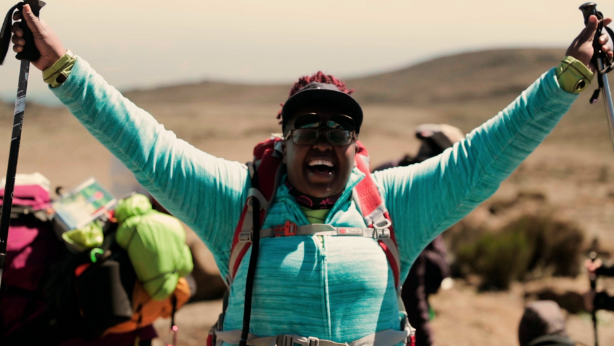 “As wide as all the world, great, high, and unbelievably white in the sun, was the square top of Kilimanjaro.”-Ernest Hemingway

Director Ida Joglar takes us on an inspiring and empowering journey with the members of the “Curvy Kili Crew” in this wonderfully touching film that explores the impact a support group can have on personal growth. Although the women of the “Crew” have experienced painful stereotyping for being plus sized, they find solidarity and compassion for each other as they setnout to scale one of the most famous mountains in the world, Kilimanjaro.

Even for someone in peak physical condition, this would be a daunting task. Many of the women of the “Curvy Kili Crew” bluntly and unashamedly describe themselves as fat. However, they also point out that this does not mean that they are lazy, unhealthy or in any other way less deserving of love and respect. This climb becomes their testimony to their own self-worth. It is both thrilling and occasionally heartbreaking as bonds of friendship are strengthened and sometimes, personal resolutions fail.

Joglar makes it very clear that these women would never be able to achieve their goal without their amazing mountain guides who consist mostly of the native people. They are true heroes who support the climbers both physically and emotionally by leading them in song and even carrying a few of them when they reach the point of exhaustion. Their devotion to the crew is as sincere as the deep affection the women have for each other. It’s impossible not to be caught up in the emotional highs and lows of the group as they slowly reach their destination.

While the world may still be judgmental in valuing people based on their appearances, the women of the “Curvy Kili Crew” experience life altering insights about themselves. Joglar captures the compelling and genuine in each of their stories and that is what makes Kili Big such an enjoyable film.