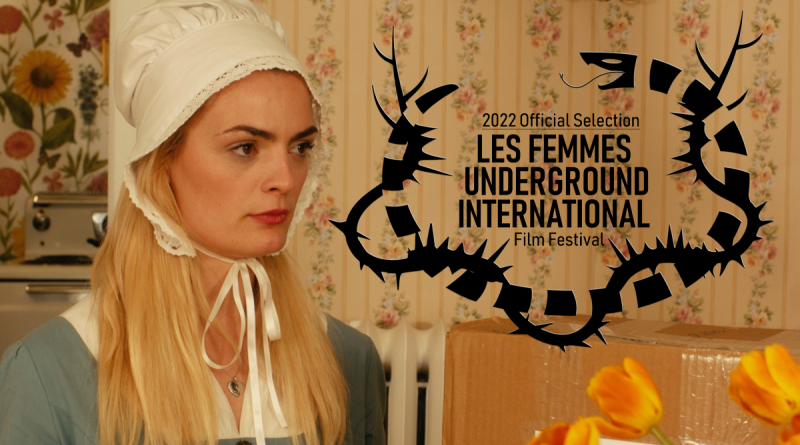 I have a confession. Positive role models bore me. I am more interested in diversity and complexity when it comes to the women that most intrigue me on the screen. Flawed, troubled, vulnerable, angry, corrupt, and immoral characters — if created with depth or originality – are what attract me.

Similarly, I am attracted to films that are diverse and complex, and most importantly, like to break with convention. That’s why I love Etheria Film Festival and Les Femmes Underground International Film Festival. These two festivals always deliver films where the women on screen and behind the camera consistently shatter stereotypes and make us look at the world and cinema through new eyes.

Fittingly, Les Femmes premiered in Los Angeles in 2016 with the guidance and mentorship of Etheria Film Festival, which also provided Les Femmes with its first jury members and helped it network with programmers and venues.

Etheria was back in person earlier this year and Les Femmes is back in person for its sixth event, which takes place Aug. 13 from 1:00 p.m. to 6:00 p.m. at the Aero Theater in Santa Monica.

Edda Manriquez is an artist and filmmaker who wanted to create a festival that would focus on women and film but in untraditional ways. If you think women filmmakers face obstacles trying to break into Hollywood then imagine the hurdles female genre and experimental filmmakers have to overcome.

The festival’s mission is three pronged. First, equip, inform, influence, and mobilize women in underground media. Second, transform the landscape of cinema for womxn by creating opportunities and forums that accurately represent them. And third, create opportunities for young girls and young womxn via educational resources, wellness fairs and literacy efforts.

This year the centerpiece feature for Les Femmes Underground International Film Festival VI is a remarkable find, Scarecrow in a Garden of Cucumbers from 1972. IMDb includes this in the trivia: “No major archives hold a print of this film, so it is potentially lost. Rumors persist, however, that one print survives in a private collection.”

Rumors were true… sort of. That’s why the film AND its backstory are both amazing.

Henry “Hank” Alpert, the producer on the film, said, “I know the film was thought lost and then it was found in the vault of Duart. They were our lab. We shot it in 16mm and blew it up to 35mm.”

Key to finding and ultimately getting the film restored through the Academy Film Archive was Samuel Bishop Prime, who set themselves a unique pandemic goal. They wanted to see Robert J. Kaplan and Henry “Hank” Alpert’s Scarecrow In a Garden of Cucumbers starring Holly Woodlawn.

Undaunted by its status as “lost” Prime began his quest. Through Facebook he connected with director Kaplan who was able to provide an extremely low-resolution or “dirty transfer” of the film allowing Prime to fulfill their goal of seeing the film. But they didn’t stop there.

“Robert conveyed to me that he heard a rumor that the film’s negative had been assumed by an archive as part of Duart Labs’ deaccession of materials kept in storage when they went out of the storage business,” Prime explained. “Having an archival and film programming background, I began to reach out to my contacts, including – but not limited to – May Hong HaDuong (previously at The Academy in Public Access and currently the Director of UCLA’s Film and TV Archive). In conversation with May, we discovered that yes, the negative for the film was, in fact, now housed at The Academy. I successfully pitched May on the rarity and importance of this popularly thought lost film. She understood and agreed that it should become a priority project for The Academy. She then looped in The Academy’s Collections Curator Fritz Herzog and Preservation Officer Joe Lindner and from there we began a conversation about its restoration and preservation that has led us to where we are today: a new 35mm print has been struck from the original negative, alongside the creation of a brand new DCP restoration.” And that made it possible for Les Femmes to screen it this Saturday and have Alpert on hand to discuss the making of the film which starred Holly Woodlawn, who had previously appeared in a pair of Paul Morrissey-Andy Warhol films, and was written by Sandra Scoppettone.

The film is an absolute delight from its opening scene where a pair of strait-laced, mid-western parents give a going away speech to their daughter as she leaves for New York. But as the parents walk away from the camera we realize they are naked from the waist down.

The film jumps genres and styles as often as its character Eve Harriington (Woodlawn) changes her mind. And if that name sounds familiar that’s because everyone in the film is named after a character we know whether it’s All About Eve’s Eve Harrington and Margo Channing or Midnight Cowboy’s Joe Buck and Ratzo Rizzo or Mary Poppins and Ninotchka.

The film is very much a product of the 1970s, a time when the studios were crumbling and a new wave of talent was rising to attempt a takeover. Filmmakers such as Martin Scorsese, Francis Ford Coppola, and George Lucas tried to shake up the system from within Hollywood but people like Warhol, Kaplan, Barbara Loden, Melvin Van Peebles, and to a degree John Waters never quite embraced mainstream cinema.

Scarecrow in a Garden of Cucumbers has a freewheeling style that defies conventions and refuses to conform to any familiar narrative structure. It also provides a cast of characters that is diverse in a way that challenged and still challenges the status quo. Woodlawn even takes on dual roles as both Eve and Rhett Butler. The film feels fresh, defiant, and experimental even by today’s standards and kudos to Les Femmes for showcasing it.

Prime noted, “[I’m] happy to be here in the wings cheering it on, contributing to the cumulative – and richly deserved – morale of its modern appreciation. If even one person sees, and is inspired in some way by, Holly’s mesmerizing and transcendent dual role – not to mention the fabulous singer Tally Brown’s turn as the most intimidating madame of the East side – in this hoot of a film that otherwise wouldn’t be possible to see because of our efforts, that’s reward enough for me.”

In addition to Scarecrow in a Garden of Cucumbers, Les Femmes is also hosting three short film showcases. I want to highlight two of those shorts as examples of why this festival is worth checking out.

First, The Only Thing I Love More than You is Ranch Dressing is a tasty one-minute horror film from Sydney Clara Brafman. It proves that perfection can exist on a small scale and that if an idea is great at 60 seconds then don’t wear out your welcome just deliver the goods and walk away while the audience is hungry for more.

And second is a truly stunning and brilliant work, in fact it is one of the best films I have seen this year and it’s sad that as a short it is unlikely to be seen by a large audience. The film is “What Happened to Her “ by Kristy Guevara-Flanagan. The film is described as “a forensic exploration of our cultural obsession with images of the dead woman on screen.”

Visually, the film is a 15-minute onslaught of dead female bodies from movies and TV shows. As the corpses roll out, pile up, get unearthed and are autopsied, actress Danyi Deats recounts her experience of playing a corpse. Deats talks about how she was treated on the set, and how it felt to play someone who met a brutal end. Guevara-Flanagan’s approach is simple: just let the interview (we only hear Deats’ voice) and the images build a case about our fixation with beautiful but often mutilated and abused female corpses. Individually these scenes in the context of their films or shows probably drew little notice from the viewer but assembled together in one relentless montage it reveals how entrenched this trope has become and it makes you wonder what cumulative impact that might have on viewers.