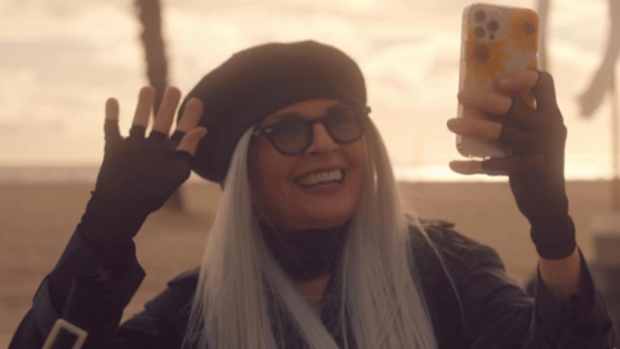 The feather-light comedy Mack & Rita is a diverting and sweet take on self-acceptance that’s content to bask in the company of the individualistic Diane Keaton.

And why not? At 76, Keaton (Book Club) is as endearing as her character thinks she’s awkward. She ambles into a Pilates studio with a long patterned coat, sparkly tam, and pink shoes, playing off being the oldest woman in the room. She burps over jumbo shrimp, then goes back for seconds. She thinks out loud, stringing what might be blunt or contradictory thoughts together, before getting behind one wholeheartedly.

In short, she’s the kind of “old gal” that our protagonist, Mack (Elizabeth Lail, Gossip Girl), aches to emulate—and through a kooky repurposed tanning bed, she actually gets to be.

Thirty-year-old Mack isn’t so much an old soul as someone who feels out of her element. Raised by her grandma, Mack is an author who loves vintage clothes and vocabulary but now works as an Instagram writer and influencer to pay the bills. She struggles to play up what’s hip and hasn’t yet learned how to have what her grandma called “less flips to give.”

Carla (Taylour Paige, Zola), Mack’s best friend since childhood, loves her quirkiness, but Mack feels like an oddball among Carla’s other pals. When the women head to Palm Springs to celebrate Carla’s upcoming wedding, Mack has more drinks than she can handle and thinks a past-life regression tent is a fine place to rest her aching head and feet.

The parking lot shaman (Simon Rex, Red Rocket) invites her to lie down in a tanning bed that has more mystical powers than even he realizes. Once Mack confesses she feels like she’s stuck in an old woman’s body, wind blows, lights flash, and she emerges as Diane Keaton, freaking out in a way Keaton does best.

After convincing Carla what’s happened, Mack and Carla introduce Mack’s older self as her Aunt Rita, explaining Mack’s absence by saying she’s using her aunt’s home as a writing retreat. While they figure out how to get Mack back to her young self again, everyone in Mack’s life soon becomes smitten with Rita, especially her dog-sitting neighbor Jack (Dustin Milligan, Schitt’s Creek).

Director Katie Aselton (Black Rock) and writers Madeline Walter and Paul Welsh (both of Brooklyn Nine-Nine) could have pursued something a bit more complicated here, especially as “Rita” starts having the time of Mack’s life. Instead of dealing with arthritis or age discrimination, the “glammy granny” becomes an Instagram sensation. The handsome Jack honestly likes her company, and Rita even hits it off with Carla’s mom (Loretta Devine, Family Reunion) and her confident and saucy friends (including Wendie Malick, Physical, and Lois Smith, The French Dispatch).

Yet Mack & Rita’s charm makes it more than skin deep. Keaton is effortlessly winsome and game for a laugh, whether she’s trying a Pilates reformer or a psychedelic tea, but the whole cast is likable, really. So is this film for celebrating older women while encouraging Mack not to skip any years along the way. There’s growth and fun to be had at any stage, Mack learns, so enjoy who you are, whatever age you happen to be.