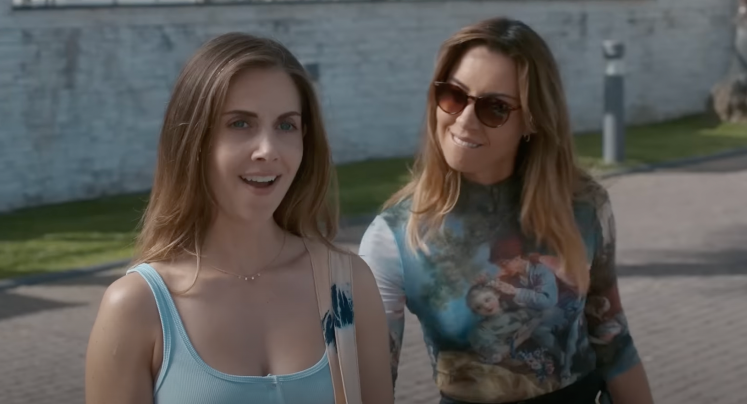 Allison Brie reteams with Aubrey Plaza and writer-director Jeff Baena for Spin Me Round, which despite a cast of comedic talents, fails to deliver on its wacky premise.

When Tuscan Grove Italian chain restaurant manager Amber (Brie) is selected to attend a prestigious training program for staff in Italy, she dreams of being swept off her feet in a romantic European adventure. However, the trip turns out to be different than she expected.

Dumped into a bland hotel instead of the promised luxurious Italian villa, Amber and her fellow guests (Baena regular Molly Shannon, Zach Woods, Debby Ryan, and Tim Heidecker) spend their day in boring conference rooms learning how their Olive Garden-esque chain is anything but authentic Italian.

When the group gets an unexpected visit from Italian Grove head Nick (Alessandro Nivola) and his assistant Kat (Plaza), Amber is whisked into a whirlwind adventure, all because she looks remarkably like Nick’s dearly departed sister. After a series of bizarre events, Amber begins to investigate the truth about what exactly is going on at the Tuscan Grove institute.

Absurd storylines get lost in the clunky plot as Baena doesn’t seem quite able to focus on the story he and script co-writer Brie are trying tell. With elements of a thriller, dark comedy, violence, and slapstick humour, Spin Me Round is one complicated mess that can’t figure out if it wants the audience to be in on the joke.

Despite a cast of talented comedy actors including Fred Armisen and Lil Rel Howery, none of the stars are given much to run with beyond perfunctory caricatures. Both Brie and Plaza (who is married to Baena) were able to stretch their acting skills further in Baena’s The Little Hours. Here things progress in such a slapdash way they barely wait for the mistimed jokes to land before launching into the next moment at breakneck speed. Nivola is given the most to work with as the one cast member who gets to show off his quirky side as the charismatic Nick, but he too gets lost amid the many storylines in Spin Me Round.

Like a beautiful pasta dish, Spin Me Round’s presentation may be great, but ultimately only delivers a plate of empty carbs.