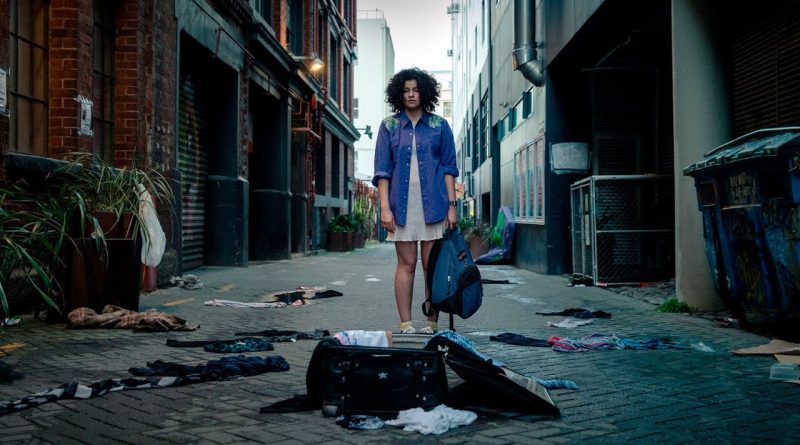 Crammed into her economy class seat from Wellington to New York, the plane is just about to take off when Millie (Ana Scotney) has second thoughts and bolts from her flight. It’s not an anxiety attack, she insists, despite manifesting all the signs of one. As she sits in the airport lounge trying to figure out how to get another ticket, a video billboard above her head reveals that Millie is the literal poster girl for her university’s success. Recently awarded a high-profile internship, she was supposed to be on her way to bigger and brighter things at a high-profile New York based architecture firm. So what happened? It takes some time for Millie Lies Low to answer, as the title character chooses to hide out in New Zealand and pretend via social media that she did in fact make the trip and things are going swimmingly – at least until she can afford another flight. But life hiding out in Wellington takes Millie on another unexpected journey.

Inspired by first-time feature filmmaker Michelle Savill herself having missed an important, career-making international flight to France where she fleetingly wondered if she could just fake it until she made it, Millie Lies Low is a low-key exercise in embarrassment humor as we follow it’s protagonist from one cringe-inducing encounter to another, witnessing her taking sad selfies in a tent and photoshopping herself into famous New York locales in an attempt to keep up the charade. The doubts and insecurities she is covering up lie at the heart of this quirky coming of age film, with Ana Scotney – who excelled in the extraordinary 2018 New Zealand comedy The Breaker Upperers – largely carrying the film on the back of her compelling, empathetic performance. An enjoyable although not necessarily deeply probing film, Millie Lies Low is a charming but perhaps not exactly memorable way to kill an hour and a half or so.