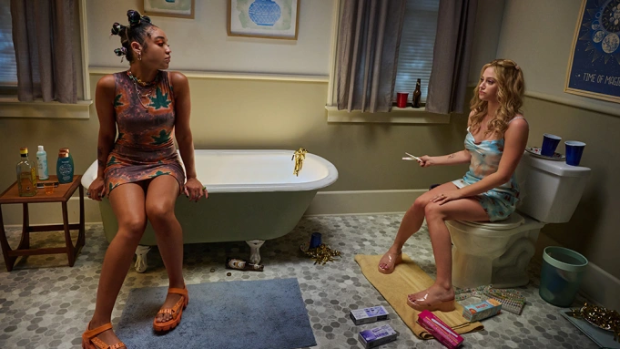 The Netflix romantic dramedy Look Both Ways is the tamest version of a “what if?” story you’ll see this year. Granted, not every film about other lives lived can match the off-the-wall creativity of Everything Everywhere All at Once—but some greater dramatic stakes could have made this more than an OK watch.

Similar to 1998’s Sliding Doors, where Gwyneth Paltrow’s character wound up in two different careers and love lives based on whether she caught a London train, Look Both Ways follows aspiring animator Natalie (Lili Reinhart, Riverdale, Hustlers) from a key moment in time. During finals week at the University of Texas in Austin, Natalie has a fling with her longtime pal Gabe (Danny Ramirez, Top Gun: Maverick), then takes a pregnancy test at a house party on graduation night.

In one timeline, she’s pregnant. She and Gabe decide to be co-parents, putting her animation dreams on hold. In the other, she’s not, so she and her friend Cara (Aisha Dee, The Bold Type) drive to Los Angeles to pursue their careers.

Making her feature debut, writer April Prosser deserves credit for not championing one path over the other, although Natalie’s decision to have the baby literally occurs overnight. There’s little discussion about her choices, considering Texas’s real-life abortion restrictions. While viewers might not want that in a film like this, her reasoning creaks of plot mechanics instead of character motivation.

“This feels like this is something that I have to do, that this is what was supposed to happen,” she says.

Director Wanuri Kahiu (Rafiki) uses Natalie’s illustrations to break up the switches between the LA and motherhood storylines. The latter winds up being more interesting because of Natalie and Gabe’s romantic tension, plus the humor from Natalie’s parents (Andrea Savage, Veep, and Luke Wilson, Stargirl).

Both are stunned, having talked with Natalie about safe sex, even though she and Gabe used protection. They’re also upset about giving up “naked Sundays” because their pregnant daughter asks to move back home. Wilson’s deadpan demeanor, especially when he observes the baby but doesn’t actually help the new parents, enlivens this section, and Savage delivers a nice bit of wisdom about adjusting to motherhood that hits an emotional truth the rest of the film doesn’t match.

In LA, Natalie meets an aspiring producer, Jake (David Corenswet, We Own This City), and lands a job at an animation studio under one of her favorite artists (Nia Long, NCIS: Los Angeles). While this portion has cute antics and swanky parties, the romantic relationship here moves swiftly, and Natalie’s career obstacles don’t carry nearly as much weight.

Reinhart is likable, and some viewers might find it comforting to see how Natalie’s lives diverge and overlap at various moments. Nevertheless, Look Both Ways feels overlong, predictable—and safe. What’s the point of exploring the path not taken if you wind up in pretty much the same place?