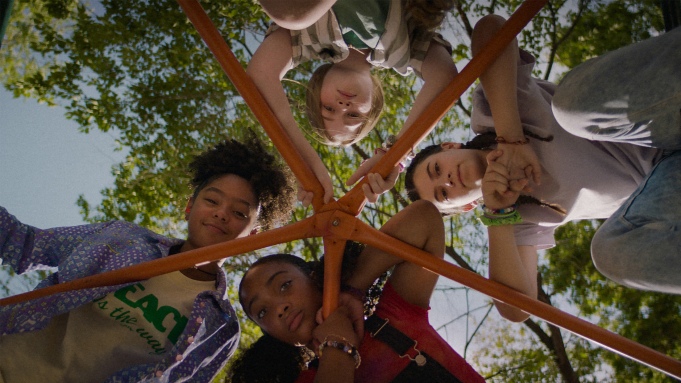 The coming-of-age tale Summering has its heart in the right place, with a tween-set adventure featuring four girls, but its jarring tones and story are a mess. Consider it a lesser imitation of Stand By Me, without the depth and nuance.

In director Rob Reiner’s 1986 classic, based on a Stephen King novella, four boys trek into the woods one summer to run down a rumor about the body of a missing boy. They sing, “Have Gun Will Travel,” tell stories, clown with each other, and make an anonymous phone call to the police once they find the child. They emerge wiser from the experience.

The four girls in director James Ponsoldt’s Summering sing “Miss Mary Mack” while hiking into the woods on their last weekend before middle school, visiting a tree where they’ve hung knickknacks. (They’ve named it Terabithia after Katherine Paterson’s award-winning novel.) Within minutes, they find a body—a facedown man in a suit who might have jumped from the nearby overpass bridge.

Mari (Eden Grace Redfield, Our Flag Means Death), the only one with a cell phone, immediately suggests calling her mom or the police. But Dina (Madalen Mills, The Tiger Rising) balks, not because she’s worried they’ll get into trouble, or because of a distrust of authority. (The friends are of different races and socioeconomic backgrounds, a dynamic that’s never explored.)

Rather, this is their last weekend together before splitting into different schools, so why ruin it with the police and their helicopter moms asking questions? She actually says, “What’s the rush?”

Dina suggests they try to figure out who the man is over the next day, a Saturday. They’ll tell the adults by Sunday if they’re stumped.

Daisy (Lia Barnett), whose mother (Lake Bell) is a police officer, agrees. So does Lola (Sanai Victoria, Diary of a Future President), who also suggests holding a seance.

I don’t want to be unkind to the young performers here, so let’s just say that the script doesn’t serve them well. Ponsoldt (The Spectacular Now, The Circle) co-wrote it with Benjamin Percy, with input from producer P. Jennifer Dana (The Assistant), according to the press notes. Yet none of these girls has the authentic personality and goofiness of this age captured in the animated quartet of this year’s Turning Red.

None questions why they’re doing this or finds it gross, either. Dina loves the crime shows that her mother watches and brings blue gloves so everyone can move the body and search the man’s belongings. The sound of flies abounds, and all I could think, having been a crime reporter for a decade (besides what the body must have looked like), was, “There goes any evidence.” The stench alone would have been unbearable—especially in August.

Daisy has a reasonable emotional impulse to find the man’s family. Her dad is absent, although whether he’s died or has left the family is initially unclear. She takes her mom’s revolver along and is the most determined—until things like dancing and singing at a sleepover take priority over their mission.

If Summering wanted to comment on youthful flightiness or detachment, that might be the point, but the film doesn’t embrace that ethos. Ponsoldt has said he wanted to make an adventure in which his daughter could see herself and her friends, and while that’s laudable, Summering doesn’t work. The film doesn’t know how to balance the weight of death and thoughts about the passage of time with the carefree and fleeting innocence of childhood. One minute, the girls are cartwheeling through sprinklers on lawns in dappled sunlight and slow motion, courtesy of cinematographer Greta Zozula (The Half of It), and the next, Mari is screaming for her mom (Megan Mullally), thinking she’s seen the dead man in the dark outside her window.

Summering has some CGI moments, such as painted handprints falling from a mural, that stick out compared to the story’s realistic bent. The film also has an unnecessary voiceover from Daisy that sheds little insight on what we’re watching, with observations such as, “I guess some things die to leave room for other things.” Really?

With its patchwork of conflicting tones and no strong narrative arc, Summering leaves its characters going nowhere.