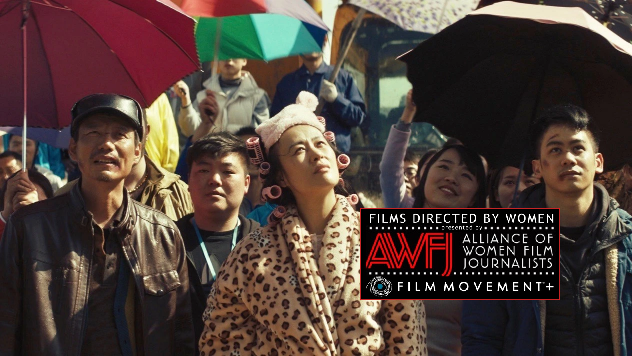 Cathy Yan’s 2018 film Dead Pigs is a dazzling debut ahead of her better-known follow up, the blockbuster superhero film Birds of Prey (2020). Dead Pigs premiered at Sundance, where it won the Special Jury Award for Ensemble Acting, but it wasn’t released in the US until February of 2021 through the independent streamer / distributor Mubi. It’s a shame the film has received such limited exposure up until now, because it is a delightful comedy that would surely appeal to a wide audience.

It’s possible that American distributors hesitated to acquire a foreign language film and held back on releasing Dead Pigs in the US (it did screen overseas). If this is the case, it’s a turn of events that Yan could have written herself, in keeping with a major theme of Dead Pigs–the dominance of Western culture, even in a rapidly advancing country like China. This is particularly evident in the character of Sean Landry (David Rysdahl), an American architect living in China who is treated by his peers like a novelty, and begins to moonlight as an actor, appearing at events as an “exotic” American character. Sean is recruited for the gig by the charismatic Angie, an overseas headhunter played by the always engaging Zazie Beetz.

Sean’s character plays an integral role in the plot of Dead Pigs, although interpersonally, he is the film’s one true loner. The other lead roles are paired up, in one way or another, in plot-twisting, interlocking fashion. Unbeknownst to the audience from the start of the film, the characters in Dead Pigs are acting in an ensemble, linked together by a rickety family tree. Drawing from her years working as a journalist, Yan’s script is finely tuned, smoothly revealing important details like magic tricks–one character is another’s sibling, and yet another’s parent; another still is the CEO of the property development company that is orchestrating much of the film’s drama, the satirically-named Golden Happiness Corporation.

In a plot line that loosely resembles Kleber Mendonça Filho’s 2016 film Aquarius (which starred Sonia Braga), Vivian Wu plays Candy Wang, the lone holdout homeowner on a plot of land coveted by the Golden Happiness Corporation for development into an apartment complex modeled after Antoni Gaudí’s Sagrada Familia. Candy successfully runs her beauty parlor like a well-oiled machine, directing her employees to administer a united pep talk in military formation while encouraging her clients enthusiastically to buck up and look their best. At home, Candy tries her hardest to live in vintage luxury, keeping her kitschy interior clean while the facade of her house crumbles, with bright red graffiti on her front door classifying her home as condemned. As far as metaphors go, Yan isn’t very subtle, always pitting images of tradition against modernity. Broad strokes suffice, however, in this sweeping satire, and the titular dead pigs prove to be Yan’s most effective narrative device, aided by her talented cinematographer, Federico Cesca. Floating placidly downstream in the strikingly blue river, the diseased pig carcasses wreak havoc on the working class of Shanghai, like Old Wang (Haoyu Yang), who makes a meager living as a pig farmer, and Wang Zhen (Mason Lee), who works in a restaurant that specializes in suckling pig. The catastrophe was inspired by the 2013 Huangpu River incident, in which over 16,000 pig carcasses were illicitly dumped into the water following an outbreak of a porcine virus. Yan poeticizes the macabre event with hauntingly beautiful images comprised of cool toned greens, blues and pinks.

Dead Pigs was co-executive produced by Jia Zhangke, an astute chronicler of contemporary China and one of our best living directors. Many reviewers have pointed out this credit as a means to compare the two directors favorably (Yan follows in Jia’s footsteps with her critique of globalization) or unfavorably (Yan’s perspective is far too blunt). Both comparisons have their merit, depending on how far one intends to take Yan’s wit. Ultimately there is something to be said for her ability to incorporate serious, sweeping topics into a lighthearted film and clearly, the executives at Warner Bros. took note, hiring her to direct the massive Birds of Prey. Whether this was the logical next step in Yan’s career remains to be seen, but so far it looks as if her talents are only beginning to flourish.