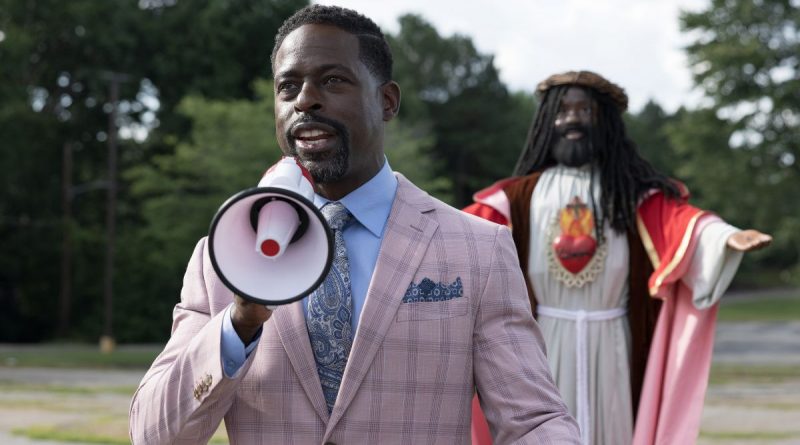 To overcome a scandal, a viral pastor and his wife hire an up-and-coming festival filmmaker to revamp their image with a cinema verité documentary. Their goal is to refill their megachurch with its previous 25000 parishioners. But, it quickly becomes evident that Lee-Curtis and Trinitie are out of touch with reality. Based on writer-director-producer Adamma Ebo’s short film of the same name, Honk For Jesus. Save Your Soul. is gloriously biting satire to the nth degree.

As revelations of the allegations against Lee-Curtis come to light, the complex nature of the story gets stickier. The dialogue is laugh-out-loud hilarious. Ebo makes full use of righteous indignation to excuse/cover sins. The script mirrors real life so accurately it is shocking. The hidden shame, faux outrage, and especially the hypocrisy, every character in Honk For Jesus is lying to themselves.

Regina Hall plays Trinitie Childs. Doing her best dutiful wife with a plastered smile, Hall is perfection. Each beat jumps off the screen. But there are cracks beneath the surface, waiting for the precise moment to break free.

Sterling K. Brown as Lee-Curtis Childs is an explosive ball of energy. It’s a powerful and physical performance. Brown’s relentless commitment to the absurd makes this film as intriguing as it is funny.

The chemistry between Hall and Brown is spectacular. It is an equal partnership of fierceness. The support they give to one another in every scene is palpable.

Honk For Jesus. Save Your Soul. is a fight for the Childs’ last remaining shred of dignity. The balance of over-the-top farce and deep-seated issues creates a hell of a story. Blind faith is a dangerous thing. Adamma Ebo knows it, and so too shall audiences.