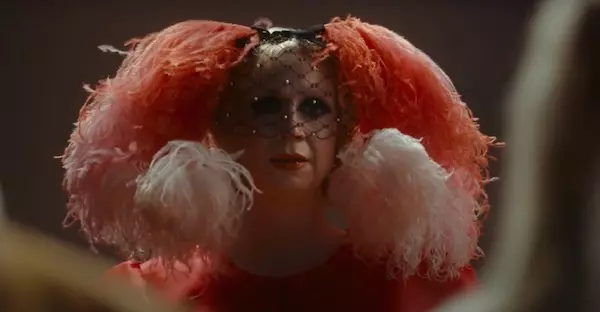 Flux Gourmet occasionally reminded me of the films of Peter Greenaway, who often juxtaposed the grotesque or disturbing with the beautiful and ethereal.

Peter Strickland’s In Fabric is ostensibly about a dress that causes disturbing events in the life of the woman who purchases and wears it, but it’s more than a story of a haunted garment. At one point we realize that, beneath the world we live in, there’s a subterranean realm that wields control over our free will. The dress is not just a dress: what it represents is part of a dark truth that permeates our lives, our desires, our dreams, and our fears. Strickland is a sly deconstructionist. He is interested in prodding us to look beneath the surface of things, perhaps goading us into admitting we are co-conspirators in what might turn out to be an elaborate pantomime of existence. I’m not sure why, but I find it impossible to watch a Strickland film (such as Berberian Sound Studio and The Duke of Burgundy, movies that also plumb disturbing depths) without resuming an inner dialogue about life, death, truth, and art that is both fretful and fascinating.

In Flux Gourmet, Peter Strickland’s most recent effort, a collective of sound artists are invited to develop their art in residency at a posh retreat in the countryside. At first glance, the place appears to be bucolic and, though small, luxurious. But there’s something odd about the setup. The rooms feel more dimly lit than they should be, and there’s no clear sense of temporal specificity. It might be the ’60s, or right now. The place is known as the Sonic Catering Institute, and its overseer, the elegant and eccentrically attired Jan Stevens (the excellent Gwendoline Christie, seen recently in Sandman), seems passionately devoted to the artistic mission: the support and nurturing of artists who perform in a rather niche realm. The collective is still trying to decide on its name. The trio consists of two sound artists, who use electronics, instruments, and food (the sounds of cooking, eating, and digestion are at the center of their creativity), and one performer, Elle di Elle (Fatma Mohamed, who had a small but beguiling role in In Fabric). Her main instrument is her body, and she is the de facto impresario and front woman for the group. A power dynamic is present from the beginning. Elle is insistent that her artistic vision must dominate the performances, despite the fact that Billy (Sex Education’s Asa Butterfield) and Lamina (Greek-French actress Ariane Labed) are contributing the bulk of the artistic output, and demonstrate impressive skill and talent. Continue reading…

Peg Aloi was a freelance film critic for the Boston Phoenix from 1997-2013. She has taught film and media studies at Emerson College and SUNY New Paltz. She's organized conferences, edited scholarly anthologies, and been a script consultant on feature films. She is currently a freelance film and TV critic.