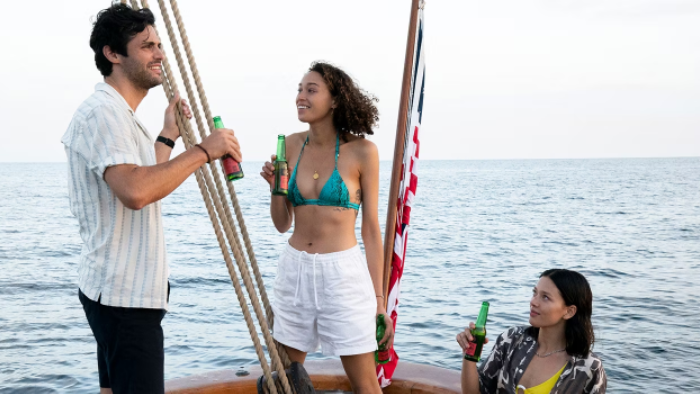 The willing suspension of disbelief.

It’s a key ingredient in many a successful movie. (Some movies, by contrast, are so manipulative they try to trigger an audience’s unwilling suspension of disbelief.)

Other movies, however, are populated by characters so unconvincing you don’t believe them — and, far worse, you just don’t care.

That pretty much sums up Into the Deep, an alleged thriller that sinks under the weight of its contrived premise and characters characterized by murky motivations and nonsensical actions.

It’s the kind of movie where you keep questioning the protagonist’s illogical choices — until you remember that, if our heroine displayed a lick of sense in the first place, there wouldn’t be any movie at all.

That may have been the wiser course — especially when you consider the well-traveled route sailed by Into the Deep.

For the rest of us, we can see the cliches coming from many nautical miles away.

When we first meet protagonist Jess (Ella-Rae Smith), she’s all at sea, literally — surrounded by water, struggling to find the surface, as a child’s voice warns, “Mommy, look out!”

Then Jess awakens from her recurring nightmare and we realize it was her voice sounding the alarm — and her mother who was the victim of an accidental drowning.

It’s been 11 years since her mother died, but Jess’ father has moved on — and he urges his daughter to do the same.

First, however, Jess reports to her dead-end job in a seaside souvenir shop, where she has a flirtatious encounter with Ben (Matthew Daddario), a glibly charming American tourist.

Jess impulsively invites Ben to a beach party — and their instant connection, amplified by Ben’s gallant response to a hostile partygoer harassing Jess, results in an invitation to visit his sailboat.

Things proceed apace, with Jess thinking that perhaps this whirlwind romance represents her chance to move on, despite her understandable aversion to being on the water.

Or perhaps not. Especially when an injured woman (Jessica Alexander) turns up needing help — and adding an undeniably undercurrent of tension to go with the fun and games on board. David Beton’s screenplay tries desperately to pile on the potential jolts, but even when they’re not predictable — which is hardly ever — they’re not clever enough to make a difference.

Director Kate Cox, meanwhile, works the movie’s claustrophobic setting for all it’s worth — which isn’t much. Alas, all the suspense-building tricks in the world can’t compensate for the lack of depth that ultimately scuttles Into the Deep.