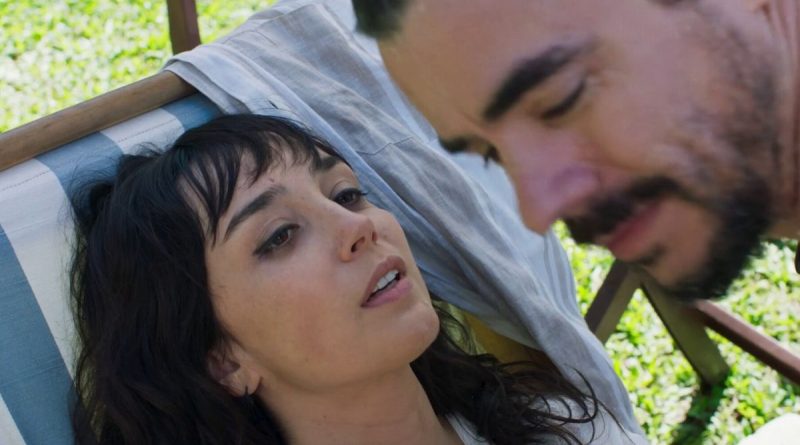 Maybe you’re not an expert on seminal works by great women writers of the 1960s, and for that you’re forgiven, but if you are, Clarice Lispector is a name you’d know. In 1943, the 23 year old Ukrainian-born Brazilian novelist was thrust into the limelight with her work Near to the Wild Heart, and went on to international acclaim, winning awards and accolades throughout the rest of her career and life. It’s Lispector’s 1969 love story The Apprenticeship or The Book of Pleasures that is the basis for Brazilian director and co-screenwriter Marcela Lordy’s new film The Book of Delights. A project that took Lordy over 10 years to bring to the screen, it is a loosely based retelling of Lispector’s beloved and somewhat controversial novel.

Grief and a full-on existential crisis have led elementary school teacher Lóri (Simone Spoladore) to retract into herself, and has her on the brink of suicide. She is sleepwalking through her days, offering philosophical, nihilistic lectures to her 7-year-old students, using a mask of dramatic makeup as distance from her former, happier self, and engaging in quick and disconnected copulation with strangers. Lóri can’t even get inspired by the spectacular ocean view in the apartment her mother bequeathed to her. It is Ulisses (Javier Drolas), a self-centered but famous Argentinian writer and professor of philosophy, who first drives Lóri to distraction, then drives her to look inside herself, and ultimately face the depths of her loneliness and isolation.

The film follows Lispector’s work, if not literally, then certainly in spirit. The novel is very much based in experience and emotion, and less in words spoken by the protagonist. However, the introspection and consideration of what love is, what life is, and how the self connects to both, are palpably there, and portrayed beautifully by lead actor Spoladore. Present too in the film is what some took issue with in the novel. There is a low hum of sexism and misogyny suggested by the sort of professor-to-student roleplaying at work between Lóri and Ulisses. Ulisses, it is true, is completely comfortable with himself, and fearless about connection with others, both in his friendships and his sexuality. For Lóri, who has intentionally cut herself off to any real connection for fear of more pain, his easy way, his comfort, is compelling and magnetic. It’s that comfort that draws her out of herself, so chauvinism be damned, I guess, if it helps her become more. In that respect, it does feel a bit dated to the time of 1969 novel, even though the film is set in the present time.

The actors are wonderful, especially Spoladore, who goes believably from the darkest place to the most joyful in the span of the film, bringing the audience with her. She is by far the most valuable player in The Apprenticeship or The Book of Pleasures. Those less aware of Lispector’s work will be in for a much more muted and depressing time than they might expect, especially given the film’s name. Thank goddess, though, Spoladore as Lóri undergoes a beautiful transformation to one who chooses life, and finds within herself the drive to seek her own joy. Too bad she couldn’t find it without some dude guiding her education.