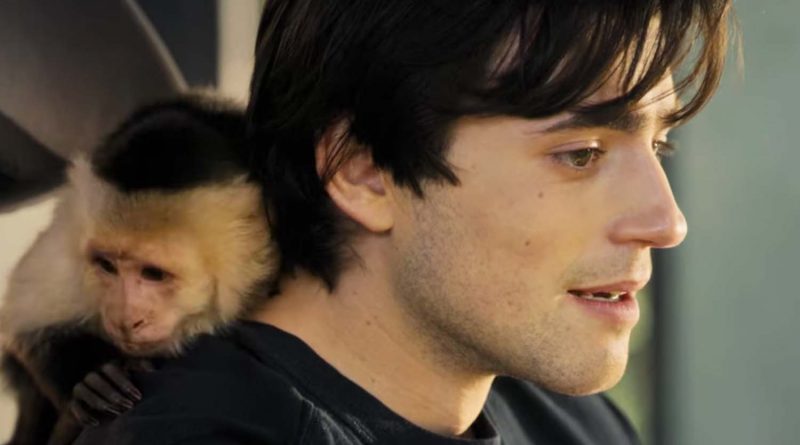 A little inspirational film about a boy and his monkey will fill the big screen and hopefully your heart. Gigi and Nate is a coming of age story, in a way, about a young man who learns he does have a purpose in life after a near-fatal incident leaves him paralyzed.

Nate is 18. Six weeks away from college. Enjoying the summer swimming and diving in the lakes of North Carolina with his friends when he develops a case of meningitis that renders him a quadriplegic. With the trajectory of his young life changed from freedom to hours of physical therapy and dependence, Nate doesn’t see a reason to live…until his mother signs him up for a service animal. In swings Gigi, a Capuchin monkey rescued from a low rent petting zoo and trained to help humans.

The pair bond and life has meaning again. They are seen around town, in the grocery store, at parties. Doctors are amazed at Nate’s progress. But just like in the movies (oh, this IS a movie), there’s always someone to put a damper on things. Enter a staunch animal rights activist and her gang of protesters who say Gigi and her type can be dangerous in society and are meant to live in the wild. Battle lines are drawn.

Gigi and Nate is based on the true story of Nate Gibson, his fiercely loving family and how they manage to beat bureaucracy. Nate is played by British actor Charlie Rowe, but he’s surrounded by our favorite American character actors, Marcia Gay Harden, Jim Belushi and Diane Ladd, now given the feisty grandma in a walker role. She makes the most of it.

Gigi and Nate is a film with life lessons. It brings hope from sorrow without being sappy. My husband, Ricky, gives it 2 👁’s open. It’s a nice family film and a perfect airplane movie and it will most likely be shown in flight by Christmas. Gigi and Nate gets a 6.