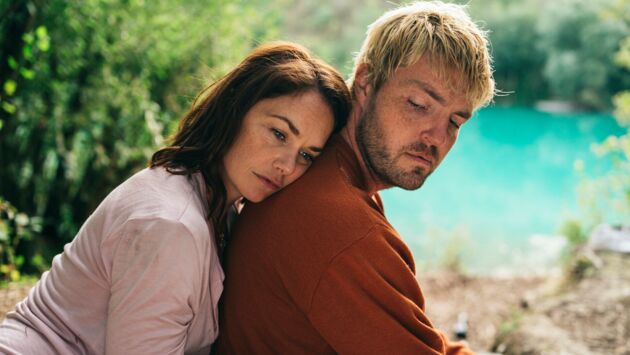 True Things is not a bad film. But that might be the highest praise I can muster. The acting by Ruth Wilson and Tom Burke is solid and convincing, and Harry Wootliff’s direction has a raw naturalism. Yet it’s a film that I found strangely unengaging and devoid of insight.

Kate (played by Wilson) is presented to us as discontent with every aspect of her life and apparently no will to try and change any of it. She is single but feels pressure from her parents and married girlfriend to settle down with a suitably employed man (good-looking if you are lucky) and have a child so everyone can relax and stop worrying about her. She hates her mundane job at the benefits office where she is on her third warning for being late. She can’t even muster the energy or interest to keep food in her apartment.

Then in walks Blond (Burke). That’s the only name the film gives him and you can tell by his swagger that he doesn’t give a damn what anyone might call him. He’s just served four-months inside and that gives him the kind of bad boy edge that gets Kate’s attention. He obviously has the confidence Kate lacks and finds attractive. When he asks her out to lunch and urges her to break the rules and just leave, she’s intrigued. And when he entices her with impromptu sex in a parking garage she is hooked.

The problem with the film is that everyone is so easy to read and one-dimensional. Kate’s friend is relentlessly narrow-minded and nagging; her parents are like a broken record repeating bland expectations about how she should live her life; and Blond is so blatantly narcissistic and oblivious to Kate that we can’t fathom why she keeps after him. I mean the sex doesn’t even seem that good. Blond just knows that Kate is desperate and attracted to the danger he presents so he can easily manipulate her.

The one dimensionality of the characters makes Kate’s choices seem obvious: dump your friend, quit your job, tell your parents to butt out of your life, and find a new boyfriend or realize that there are benefits to being single. There doesn’t seem to be any nuance to the people who surround Kate so we can’t understand why she doesn’t see the clear choices. If we are meant to find her continual bad choices a source of interest, then Wootliff should watch a film like Uncut Gems.

I’m not sure how we are supposed to react to Kate. Are we being asked to feel sympathetic to her because she picked and still keeps a lousy friend who regularly makes her feel inadequate? Should we feel bad for her because she is in trouble at work for failing to be professional enough to arrive on time? Are we supposed to read that as rebellion? And should we be angry because a guy who promises her nothing and delivers on that promise isn’t fulfilling her needs? I don’t need a protagonist to be likable or admirable or smart but I need them to be more interesting than someone I might overhear complaining about their life at a booth in a diner. Or I need the mundaneness of their life to be rendered in a way that compels me.

Perhaps I just don’t have the patience for people like Kate who are easily bruised by what others think of them or say to them, and walk around feeling victimized but unwilling to stand up for themselves.

Yet I loved Joanna Hogg’s far superior exploration of a toxic relationship in the brilliant The Souvenir, which also starred Burke as egotistic boyfriend. That film got under the skin of the characters to make us understand why a smart, attractive woman would allow herself to be manipulated by a complete heel. Hogg also gave the film a stunningly unique style that made us see even the familiar from a fresh perspective. And films such as Lynne Ramsey’s Morvern Callar, Rose Glass’ Saint Maud and Eliza Hittman’s Never Rarely Sometimes Always gave us far more interesting women trying to cope with dissatisfaction and trying to find their place in the world.

The film is adapted by Wootliff from Deborah Kay Davies’s novel True Things About Me. Perhaps the problem is that while she writes and directs individual scenes are fine on their own, they just never add up to anything memorable or fully fleshed out. But the film reveals enough talent to make me want to seek out Wootliff’s debut feature Only You.