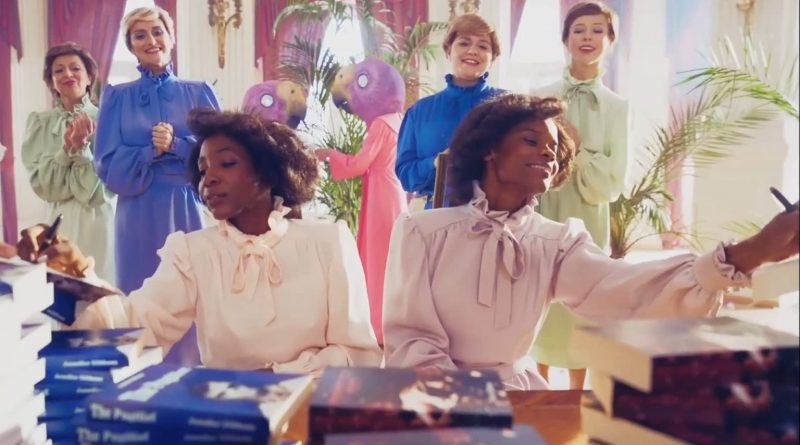 Polish director Agnieszka Smoczynska serves up an edgy, unnerving and provocative drama with her latest movie The Silent Twins. Not since The Shining have female twins gotten so under my skin. This fictionalized true-life story focuses on June and Jennifer Gibbons, two Black sisters who grew up in Wales and stuck together. Both had a creative streak but they also had major mental illness issues, including incidents of self-harm and psychological woes.

We first meet the sisters, they are toddlers who are averse to speaking to with their other family members. But when they reach their adolescent stage, that is when they are truly tempted by fate as they flirt with boys and commit crimes such as arson. That’s when we learn that June and Jennifer’s troubles truly flair up.

As for June, Letitia Wright – who is part of the Marvel universe for her role as Shuri in 2018’s Black Panther – might draw some fans to this rather raw and abrasive tale that takes place mostly in the 1980s. As for Jennifer, she is played by the lesser-known Tamara Lawrance. Both ladies, however, leave a large mark on the screen, even if there is little comfort and joy to be had. After a spree of vandalism inspired by an American boy they both idolize, the girls, now teens, end up Broadmoor Hospital, an infamous psychiatric hospital, where they face the choice to separate and survive or die together because of their emotionally travails. At times, both girls seem to be knocking on death’s door, given their problems.

Perhaps because their lifestyles are so jumbled, Smoczynska adds some visual and aural flourishes including ‘80s songs by such bands as The Clash and T-Rex. The filmmaker does end up injecting stop-motion animation figures that Jennifer has created, giving the story a weird fairy tale vibe as winds down and the twins meet their ultimate fates.