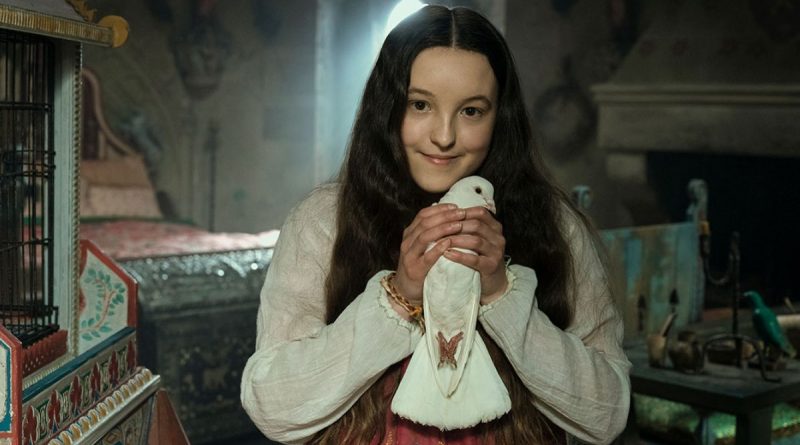 If you think life is hard for women in our 2022 world, try being a 14 year old daughter of an impoverished English aristocrat in the 1290. As much as girls have always been girls, in that era, ‘coming of age’ happened while restrained and controlled in a thousand different ways. This included being married off to a whatever wealthy man would have them, just to keep their titled family housed and fed. Such is the backdrop of Lena Dunham’s latest film, Catherine Called Birdy, based on Karen Cushman’s beloved and Newbury Award-winning YA novel. Dunham got the rights to the book, which she first read as a 10-year-old, in 2013. She has been working to bring it to the screen ever since, penning the screenplay, raising the money, and building her cast and crew for what she has called one of her most personal projects. The film features committed performances, and characters that represent medieval times while also showing themselves to be universal. Though Catherine, Called Birdy deviates in some significant ways from the novel, it is sure to please its longtime fans, while making new ones who will root for the spunky heroine, and her colorful family and friends.

The story unfolds as told through a diary kept by Lady Catherine, aka Birdy (Bella Ramey). Even in the first moments, Lady Catherine is clearly not following the road expected of her gender and station, as we find her taking part in a village mud fight. She pushes against what is expected of her, especially as it relates to becoming “a young lady” of marriageable age. Unschooled in things like menstruation and the facts of life, she panics when she finds herself bleeding, then hides the monthly evidence. Her mother Lady Aislinn (Billie Piper) loses baby after baby, but keeps getting pregnant, even after learning the next time might kill her. Her father Lord Rollo (Andrew Scott) is far from perfect. He is financially irresponsible, mostly stays drunk, and is often willing to lean a bit too much into the benefits of being “lord of the manor’. Birdy’s best friend Aelis (Isis Hainsworth) is the loveliest girl in the shire, which only makes her worth more money as a bride. Her uncle George (Joe Alwyn, looking, as Dunham herself says, like a medieval Kurt Cobain) is Birdy’s hero, and someone she’s had a lifelong crush on. She doesn’t see, returning from the crusades, just how war-weary and cynical he has become. How can Birdy grow into adulthood, while maintaining any autonomy or holding any joy for herself, in a world where she is meant to be less, meant to be a commodity? Will any of her family or friends help her keep a bit of herself as she does so?

Much of Birdy’s experience remains relatable to any 21st century 14 year old girl, though through a medieval lens. Her brother is a monk who requested she keep a diary. Every one of is fellow monks are as hot as any group of skater boys. When George falls for Birdy’s best friend, she is jealous and betrayed, just as any teen today would feel. She is both repulsed and compelled by the idea of kissing. Birdy is as annoying and unlikeable as most 14 year old girls unhappy with their current situation, but is also as willing to sacrifice or dedicate herself to those she loves.

While Dunham is largely keeping historical accuracy, she chooses specific deviations. She mixes the female choir-based score with lyrically appropriate modern songs like The Angels’ My Boyfriend’s Back and Mazzy Star’s Fade Into You, performed by female vocalists. One thing that is made clear from the onset, and repeatedly, is how many ways modern girls still face restrictions and societal limitations due to their sex. Dunham is asking ‘how much, apart from indoor plumbing and the internet, has changed for us really?’ It’s a fair question for girls around the world, including the US given recent changes in the Supreme Court and the laws of the land.

Catherine, Called Birdy goes beyond what those who might not have liked Dunham’s other offerings might expect. It stays true to the spirit of Cushman’s book, what is now a YA classic, and still gives the film a life of its own, allowing the performers to bring each character to life. Sophie Okonedo is a particular standout as an older woman who has found a way to make peace with her lot, while finding independence and a bit of joy for herself. For spirited teen girls and those who love them, Catherine, Called Birdy will be a fascinating look at history as well as a cinematic affirmation of what girls have faced for centuries and continue to face to this day.