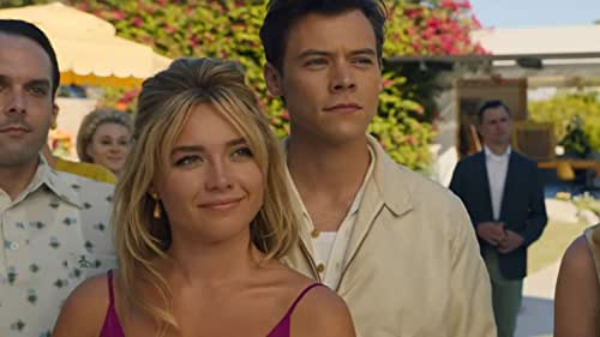 If there’s truth in the old adage that any publicity is good publicity, Don’t Worry Darling should blast off when the box-office opens on Friday, September 23.

After its Venice Film Festival premiere, salacious buzz about the psychological thriller was overwhelming, centering on rumors about tension between director Olivia Wilde and star Florence Pugh. Speculation centers on Wilde’s infatuation with pop-star Harry Styles, causing her split with long-time fiancé Jason Sudeikis, a friend of Pugh’s, plus Wilde’s firing Shia LeBeouf, replacing him with Styles.

Alice is friendly with her saucy neighbor Bunny (Wilde) and disturbed Margaret (KiKi Layne), who wanders around the pristine enclave like a zombie – perhaps because she went ‘off-limits’ into the desert and ‘lost’ her young son. According Victory’s creepy physician (Timothy Simons), Margaret will be well soon – but Alice suspects otherwise.

Problem is: there are too many intriguing yet meaningless distractions- like kaleidoscopic Busby Berkeley numbers and Styles’ celebrating his promotion by erupting into a wild tap-dance routine accompanied by a big band.

All this dilutes what should have been a provocative payoff, even though Pugh’s gradual self-awareness exudes a frightening deception, coupled with nervous disillusionment. And the setting evokes memories of the Manhattan Project’s highly regimented ‘secret cities’ for those who developed the atomic bomb.

On the Granger Gauge, Don’t Worry Darling is a flamboyant, feminist 5, opening in theaters on Friday, September 23