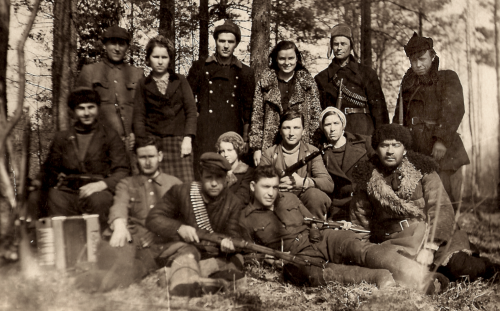 Eighty years since Nazis herded parents and children, old people and young, into fenced ghettos. Then into trenches to be shot. Or onto boxcars to be transported to so-called work camps, from which millions never returned.

In a time where audiences know these basic details, thanks to school lessons, books, or films, the documentary Four Winters: A Story of Jewish Partisan Resistance and Bravery in WW2 still strikes a harrowing chord. Here, eight men and women share riveting and intimate stories about losing their loved ones and forging resistance regiments in the forests. They were among more than 25,000 Jewish partisans who killed Nazis and their collaborators from 1940 to 1944, also wrecking bridges and derailing trains to disrupt the German war machine.

Writer-director Julia Mintz, a longtime producer (Independent Lens, American Masters), intersperses close-ups of these survivors with black-and-white footage from their youth before the Nazi occupation, plus photos and footage of planes, tanks, and on-the-ground brutality. We see unarmed people beaten, women stripped naked, and mass graves.

Remarkably, the film also includes a wealth of photos of the partisans and their rudimentary camps, where they hollowed out places to sleep under the snow and trees. Several photos are from Faye Schulman of Lenin, Poland, who was a teen back then. She trekked through the woods in a leopard fur coat, taking aim with a rifle when she wasn’t using a blanket as her darkroom.

“The pillow was the rifle, the walls were the trees, and the sky was the roof,” says Schulman, who helped detonate trains bound for the front lines or carrying belongings from Jews slain in the ghettos. (I’d gladly have watched a whole film about this woman alone.)

Before Schulman scraped by in the woods, a Nazi commandant summoned her to take his portrait. In 1942, as the Nazis rounded up about 2,000 people from the Lenin ghetto, including her family, one soldier saved her, taking her into a synagogue. From the roof, she saw the others ordered into trenches and shot.

“I didn’t want to stay alive by myself,” she says, becoming teary. “I wanted to die together.”

Revenge and determination spurred her into the woods, like the others interviewed. Jews have a reputation of not being fighters, says Michael Stoll, also of Poland, but he couldn’t help but take the chance. He jumped from a train bound for a concentration camp, tugging his father along with him.

Luba Abramowitz, also of Poland, lost her husband, her one-year-old son, and her parents before smuggling ammunition for resistance fighters, then joining them herself. “Vengeance—that is the meaning of our life now,” she says a friend told her, snapping her out of despair.

Life in the woods was rough, with food scarce. The partisans recall robbing houses for food, boiling “bandages” from scraps of clothing, and killing Germans and spies in cold blood—whatever they had to do to stay alive. As their stories unfurl and intermingle, I was struck by how resourceful and brave they became, even as one waved off that description, and how random they find their survival.

It was a miracle they still struggle to explain. “Why me?” one asks. “To tell the story, maybe.”

I wish the film had included a postscript about these interviewees today. (The Jewish Partisan Educational Foundation notes that Schulman died at age 101 in April 2021, for instance.) Nevertheless, Four Winters is an absorbing and emotional testament to a little-known aspect of the Holocaust, and a much-appreciated record of resistance.