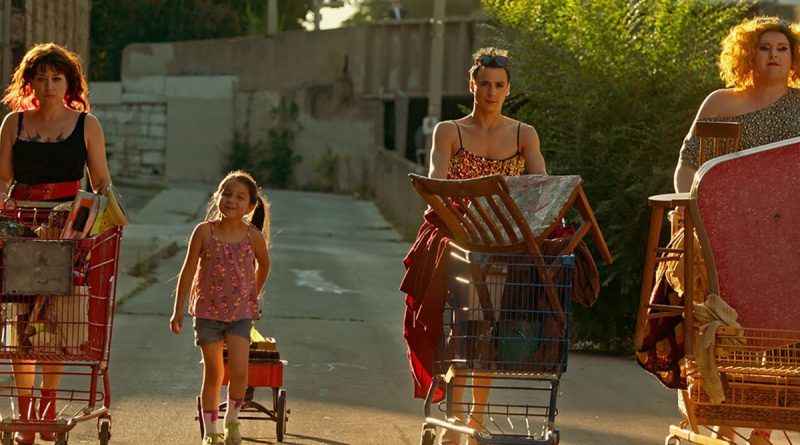 Here’s an example of a film whose heart is in the right place but whose characters and storyline probably sounded deeper on paper than they come across on film. The 80s-era Montréal setting also had a lot of promise. Keris Hope Hill in the role of the titular young Rosie could not be cuter, and her little-girl energy (spinning and singing and dancing) is totally true to life. Her openness to loving her makeshift new family and learning about her Cree culture are the film’s high points.

It’s the adult characters who, unfortunately, come across as types more than full-fledged people, and some of their reactions and antics feel overly scripted. Scenes where we’re supposed to root for the trio of Fred (Melanie Bray), Flo (Constant Bernard) and Mo (Alex Trahan) fall flatter than writer-director Gail Maurice surely hoped. The Canadian film, world premiering in the Discovery Programme of the Toronto International Film Festival, has its moments, but overall fails to live up to its potential.

Fred, short for Frédérique, is a 37-year-old French-Canadian woman whose life is a bit of a mess. She can’t hold down a steady job and is behind three months on rent. She fancies herself an artist but doesn’t sell her work. Best friends Flo and Mo are two trans women with their own traumas – Flo was disowned by her father while Mo is a frustrated performer who suffers from stage fright. When Fred is tracked down by social services to take in the daughter of her deceased adoptive sister, she does everything in her power to avoid the responsibility.

The reality is that Fred isn’t mature enough to take care of Rosie, evidenced by her inability to get her life together and actions like abandoning Rosie to a stranger in the park. Of course, it’s unfair to expect Fred to become a loving mother from one day to the next, and Maurice wants us to empathize with her character. She seems to intend Fred’s actions to come across as flighty and misguided but perhaps part of an 80s rebel spirit and therefore understandable given the circumstances and her non-conformist personality. The trouble is that irresponsibility in your late 30s isn’t the same as youthful experimentation, and there’s more at stake, making Fred’s character more aggravating than endearing.

Bray, Bernard and Trahan also all seem pushed to overact their parts, which can grate on the viewer’s nerves. It’s when Rosie has finally wormed her way into the adults’ hearts that they get serious and make a home for the child. The film comments on a system that rips young girls, indigenous especially, away from their families, and young Rosie’s connection with an older Cree gentleman on the street is quite sweet.

The brick and graffiti of the film’s Montréal setting suggest urbanity without any real grittiness or danger (this is Canada, after all). This works against the characters, who are supposed to be ‘street smart’ and, in Flo and Mo’s case, street workers, but it lends the film a comforting feeling – like things will be okay for Rosie no matter what. An 80s-era soundtrack, including memorable use of Joan Jett, adds a bit more authenticity, as does the studied (and fabulous) period wardrobe.