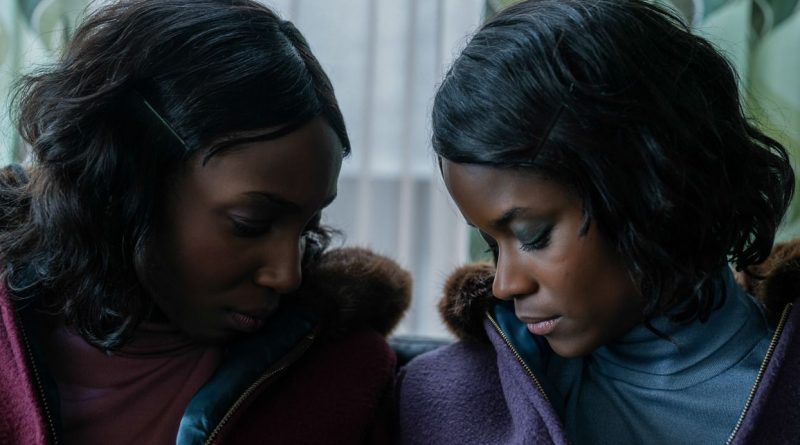 The real-life story of twin sisters June and Jennifer Gibbons continuously confounds psychologists and curious onlookers alike. As young girls from Barbados whose father transferred to Wales for for work, they were the only Black family in their neighborhood. The girls experienced insurmountable isolation and bullying. As a result, they turned inward, refusing to speak to anyone other than each other, and exhibited succinct behavior, almost catatonic at times. With each passing year, The Gibbons sisters enigmatic relationship wreaked havoc on their family, communities, and each other. The Silent Twins creatively illustrates their experiences. Theirs is a story that baffles the world.

The only time they spoke aloud was in their bedroom, where together and individually they created magnificent plays, poems, and short stories. The Silent Twins utilizes mixed media stop motion animation to illustrate the girls’ elaborate writing. When you hear their diary entries, you soon realize their astonishing level of intellect.

Following their dismissal from school, the girls enter a specialized education program (which later proved useless), followed by separate residential schools. June struggles to adjust to the separation, becoming despondent. Once reunited, things regress to what was the status quo in their childhood bedroom for the next few years.

The dynamic between the two is clear; Jennifer exerts all power over June. Adolescent jealousy brings a new level of vengeful animosity to Jennifer and June’s relationship. Jennifer’s infatuation with an influential bad boy brings drugs and pyromania into their lives. The consequences of these behaviors lead them to their eleven-year admission to Broadmoor Hospital. The publication of June’s book further drives their competitive nature.

The Gibbons twins made a pact in childhood stating that if one of them died, the other should begin to speak and live a “normal life.” On the day of their release from Broadmoor, Jennifer passes away in the transport van. While the circumstances did not sit well with anyone, her autopsy would later reveal a case of undiagnosed myocarditis. Rather than sink into grief, the death of Jennifer frees June from a lifelong emotional and physical prison.

Performances from Letitia Wright and Tamara Lawrance will blow you away. Their vocal specificity is imperative to understanding the real-life twins’ dialect and speech patterns. Their volatile chemistry jumps off the screen. Each actress has their time to shine.

Prior knowledge of this bizarre case proved to be a blessing and a curse. A few things felt stylistically superfluous, especially a runtime of nearly 2 hours. I almost wish this haunting tale were a touch more straightforward. The stop-motion sequences are such a powerful device that the added songs and whimsical choreography appear to be overkill. I’m unsure if The Silent Twins works as a whole. Perhaps, a viewer with zero previous understanding of The Gibbons’ strange existence might come to a different conclusion. If you fall into that category, I recommend going into the film without researching it first. Either way, director Agnieszka Smoczynska undeniably displays a unique vision of two mind-boggling women.