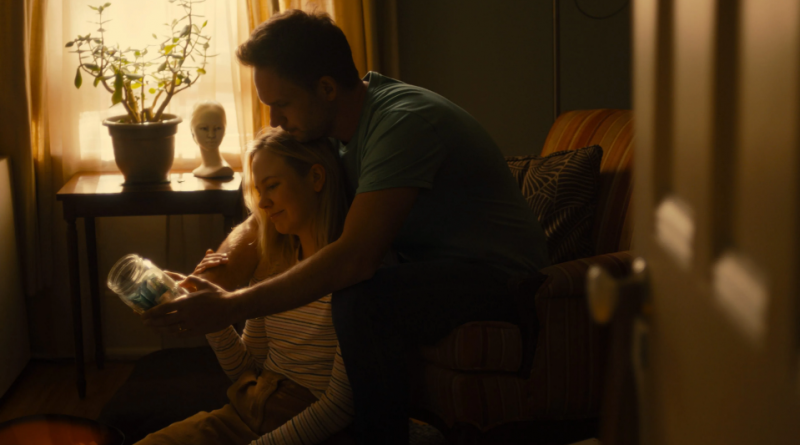 As someone who grew up watching Casablanca, Gone with the Wind and Roman Holiday, I firmly reject the Seth Rogen and James Franco type of films where swearing and coarse language are the driving force. Not to mention, Kevin Hart’s humor, that is also all about swearing. But when the same swearing happens in the film, like in Serial Mom, you forgive the writers because times do change. People now demand something rough, offensive and vulgar. Luckily, not every writer or director follows the trend and focuses more on why certain language is used and how it can serve the narrative.

With a screenplay by Kate Hewlett and directed by Lindsay MacKay, The Swearing Jar is a film that will warm your heart from start to end. Simon (Patrick J. Adams) and Carey (Adelaide Clemens) are just too perfect together. By looking at them, you can tell they are destined to be together. Their sense of humor and ability to twist the language and do whatever they like with it leads them to swear a lot. Now that Carey is pregnant, the two promise not to swear again, therefore, come up with a swearing jar where they put money as penalty for swearing. But something is not right about their relationship. Yes, Simon is Carey’s soulmate. But when she meets a librarian and musician, Owen, Carey struggles between two hearts as she tries to determine her next move.

The most defining moment in the entire film is when Simon’s mother Bev (Kathleen Turner) arrives. She asks Carey, “Are you happy”? When the woman replied positively, then Bev continued, “Lean into the happiness. Memorize it. They always leave,” suggesting her son might follow the footsteps of his father and abandon his family in the same fashion. We become worried for Carey, so does she. When she enters the bookstore, she meets Owen, a charismatic young man with “I am your soulmate” written all over his face. He actually is. He is sweet, gentle, not pushy and has lots of patience. It’s Carey who hesitates to let the second man enter her life, while she already has one – the love of her life.

And that’s where you think more about Carey, Simon and Owen. You try to understand their dynamic and predict what can happen next. We know that Simon is hiding something. Because he has a paper in his hand to show to his wife, right before she shared a wonderful news – a baby is coming. The news stopped Simon from saying what he had planned to. It will take time for us to realize the content of that paper. But we already know – whatever it is, perhaps, Bev was right – maybe Simon will follow his father’s footsteps and leave Carey and his child behind. But that is just our assumption. Because Simon does not look like someone who would do that. He cherishes Carey way too much. But what is it that is happening and why the marriage forces Carey to look the other way?

The Swearing Jar is a very compelling love story about a woman who is indeed broken inside. Through the beautiful songs and lyrics, more or less, we come to know what is really happening. But it’s the commanding Lindsay MacKay direction that brings an important aspect of Carey and Simon’s marriage to life and provides an exquisite explanation as to why Carey does what she does. She does look guilty. Because she does not want to let the other man into her life. But whatever we learn soon leaves her no option. But why complicate it if it’s an easy step? And that’s why “The Swearing Jar” is so good – it slowly builds up the narrative and delivers it with a bang, but through humor, gentleness and charisma.