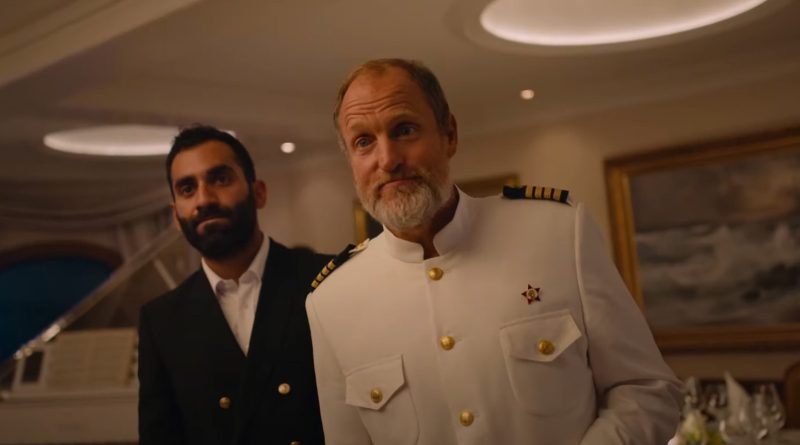 We will always be divided into the super rich, middle class and poor. And when the three classes collide, it reveals the dark side of human nature. We do expect that one or the other will act in a civilized manner once forced to go through unforeseen hardships. And while one prevails, the other one fails. Someone else tries to take advantage of it, and another one, perhaps, finds a way to improve themselves. Whatever happens, the balance of power always lies on a slippery slope – and only the one who feels it strongly, takes it.

Triangle of Sadness is a film of such high magnitude only Ruben Ostlund could’ve delivered. It’s a story of super wealthy people gathered on a cruise ship, an exquisite one, with luxurious accommodations. It’s a cruise where the rich place orders while the crew members must obey without hesitation. No is not acceptable as an answer. When celebrity couple Yaya and Carl accept an invitation, the young man promises – whatever happens at dinner time will be forgotten forever after their short vacation. He was right. It will be. Because there is a lot more about to happen that will force them to shift their priority.

Carl (Harris Dickinson) and Yaya (Charlbi Dean) are affectionate towards each other. However, they cannot decide who will cover the bills. Is it Yaya, who promised to pay for it the night before, or Carl, because he is a man, hence, expected to take care of the financial part?

The captain (Woody Harrelson) is engaged in a wasted life on the ship, while his privileged passengers think he and the crew are invincible. Dimitri (Zlatko Buric) is a Russian oligarch who has so much money, he can buy a few countries if he wants to. Paula (Vicki Berlin) is the head of hospitality who coaches her employees to always say, “Yes Sir, Yes mam” and hope for a generous tips at the end of the trip. Winston (Oliver Ford Davies) enjoys a trouble-free life after inventing a hand grenade. Everyone on the ship is too focused on their own life until the moment when a tragedy occurs and the ship goes to the bottom of the ocean, leaving few survivors on an island where the toilet manager, Abigail (Dolly De Leon) is the only one who knows how to catch the fish.

The moment the film starts, it blows your mind away. Personally, I could hardly go through Yaya and Carl’s argument at the dinner table at the luxurious restaurant where the two cannot decide who offers their credit card. If that was not enough, the next scene was even better and less tolerable in the sense of how hard it hits the nerve. Then, once you are taken to the ship, you will feel a bit relaxed, as what else can go wrong with people who think they own the world? When Paula knocks on the captain’s door, asking him to appear for a captain’s dinner event, he refuses to open the door. You can tell, by the sound of the bottles coming out of his room, he is drunk. Having Woody Harrelson taking over that role is one thing, but matching him with Zlatko Buric gives the effect of a thunderstorm – wherever you go, you can’t hide from their biting sense of humor.

Recently deceased Charlbi Dean was a complete revelation. You could tell by her performance, she was determined to take the acting world by storm. Every scene with her will most certainly be treasured forever. The entire cast, of course, has done outstandingly well by doing an ethereal job – portraying their characters in a subtle, nuanced way. Watching films like this, you realize better how it’s up to the actors to transpose the script onto the silver screen. What they all have done is laudable and worth mentioning every time you talk about it. As for the script and direction, what can I say, other than reiterate it’s a Ruber Ostlund film – it speaks for itself.

As for the takeaway, The Triangle of Sadness perfectly captures the balance of power and how it can shift. It all comes down to what you know, what you can do and what you cannot. Humans are corrupt, whether rich or poor. And when the poor gets a chance to stand out, they’re abused, taken advantage of, and the actual humiliation starts. Is the story about the poor going rogue? No. But it shows how we people do not realize one thing – for a better outcome, collaboration is required. And when we don’t work together but instead try to overpower each other, the result will be the exact the same – good or bad, wealthy or poor, we all become as corrupt as everyone else.