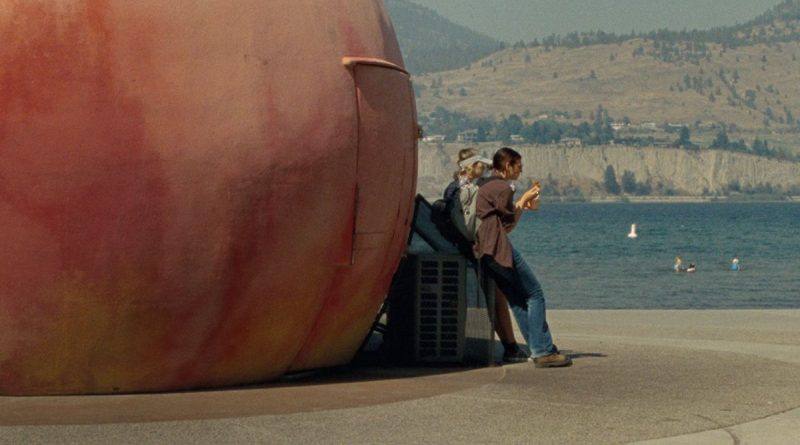 Until Branches Bend is billed as a psychological drama, but it’s made to feel a lot like a horror film. Unsettling a cappella chants and flute music crescendo at odd times, infusing the action of this Canadian-Swiss co-production with a growing sense of tension even as characters engage in otherwise everyday-looking activities. The main character’s increasing social isolation, unwanted pregnancy and the stress of being painted as a villain in a small, rural town appear to be making her go mad, and actor Grace Glowicki captures this in an extremely physical performance, her body an awkward amalgamation of sharp edges and peculiar curves. The film is world premiering in the Discovery Programme at the Toronto International Film Festival.

Glowicki plays Robin, an average young woman from a small farming town who works at a peach factory. One day she finds a beetle inside a peach and brings it to her boss, Dennis (Lochlyn Munro), with whom she appears to have a surprisingly casual repartee. Dennis takes it to his boss, who suggests they ignore it. Robin isn’t convinced and gives pictures of the bug to a local research center, which shuts down the operation out of an abundance of caution. The townspeople who rely on work at the factory and in the peach fields blame Robin for their sudden unemployment.

Robin finds herself increasingly alone and the target of escalating acts of vandalism and violence. Her younger sister, Laney (Alexandra Roberts), with whom she lives – parents aren’t in the picture – has a new boyfriend, a wealthy out-of-towner who seems to be working the fields as an anthropological experiment rather than a means to support himself, but Laney might leave town with him. Dennis denies any knowledge of the bug, and even Robin’s best friend, orchard foreman Jay (Paul Kular), starts avoiding her.

Meanwhile, Robin is pregnant and trying to schedule an abortion, but the closest clinic, which has appointments few and far between, is a five-hour drive from her home. We never learn whose baby Robin is carrying, but her pregnancy and the fetus growing inside her parallel the possible invasion of the beetle species and her growing obsession with proving their presence. She is frustrated at every turn in her attempts to get an abortion, and a scene where a medical worker apologizes for having to read her a medically unproven (by the clinician’s own admission) list of possible side effects of abortion captures the hypocrisy and frustration Robin is up against.

She spends a night frantically breaking apart peaches in search of pests under a head lamp, and at one point seems to imagine herself giving birth to a peach with a beetle on it. Her angled eyes dart paranoically behind wire-rimmed glasses as her body, already curved at the top of her back, appears to be rounding at the belly as well. Without giving too much away, a haunting scene involving the pregnancy shows her body in the shadows of night contorting in strange and disturbing ways.

Other scenes also portend danger, like when she cracks an egg in a bowl and sees what looks like an eye staring back at her, when she hears sounds while she’s in the tub, when her dog won’t stop barking outside, or when she stops her car on a dark road to vomit then lies flat in the headlight-lit grass. Robin is in many ways a hero, but she behaves like a suspect – her character’s minimal dialogue leaves a lot unanswered, certainly a conscientious choice of director and co-scripter Sophie Jarvis. Robin is no Erin Brockovich, but she has found herself in the middle of a storm. That symbolic position is captured literally in a climactic scene, one more in a series of memorable images and sensations this film will leave you with.