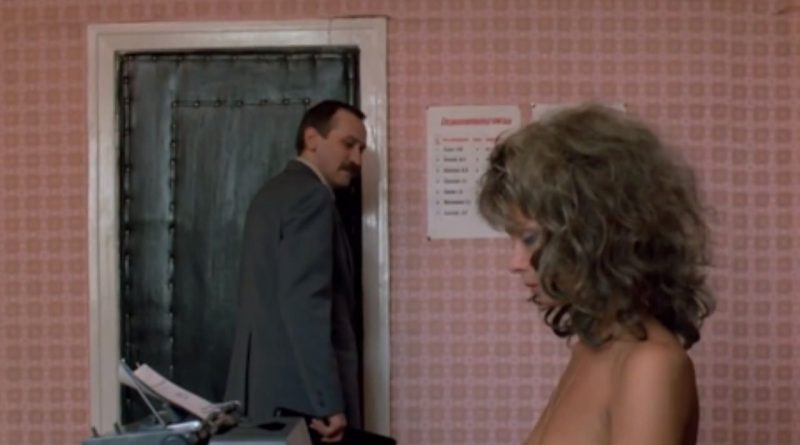 In late 1980s Soviet Union, Alexey Varakin, an engineer from the Moscow Mechanical Plant, visits a small town that has supplied his business with air conditioners for fifteen years. Alexey hopes for adjustment to back panels that no longer fit changed technology. As director Karen Shakhnazarov shows in Zero City, Alexey’s task will immerse him in an absurdist drama.

As Alexey, Leonid Filatov expressively communicates his thoroughly confused, perplexed state. For starters, on his first visit to the suppliers’ office, he finds a nude secretary typing away as if nothing is awry. And as one bizarre event follows another, citizens do indeed seem to experience no problems with the absurdity of what transpires. In one extended scene in a museum twenty-eight meters underground, a guide regales Alexey with a mind-boggling, bizarre tour of a thousand years of Soviet history, including the fall of Troy, Roman visitors, Attila the Hun, and Stalin—all hinging on the town’s first rock’n’roll performance of Rock Around the Clock.

This and subsequent flights of fancy follow, including more rock’n’roll moments and Alexey’s inability to leave town. His refrain. “I have to get back to Moscow,” fails to register. Meantime, further incomprehensible events entangle Alexey in a possible murder—or suicide—who knows? —his alleged local relative, a taxi to nowhere, a boy who foretells the future up to 2015, and a lecture on the great Russian spirit.

Delivering it all in a carefree fashion, co-writer Shakhnazarov keeps his cards close to his chest, never wink-winking at the audience. His satiric, occasionally surrealistic critique lands blow after blow; but, given his creativity, it’s a shame the women characters remain entirely secondary and underdeveloped. They also could have contributed a great deal to this fine socio-political critique.

The Soviet Union submitted Zero City for a Best Foreign Language Film Oscar, though it wasn’t included in the final nominees. In Russian with English subtitles.