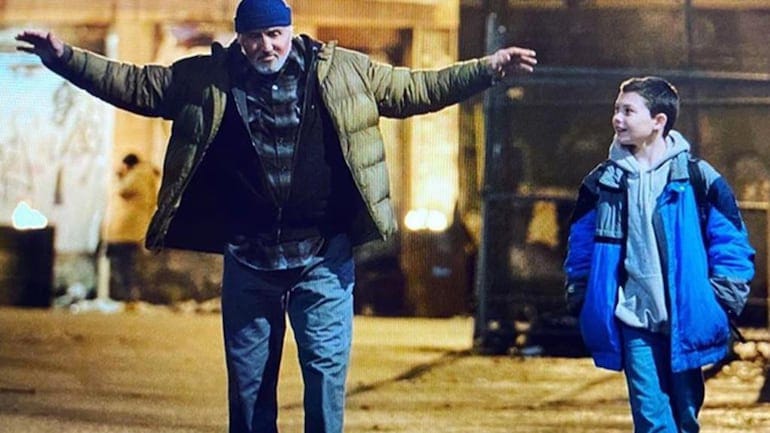 Samaritan opens with an animated, comic-book-inspired segment detailing the legend of how superhero twins – mortal enemies – fought for domination. Samaritan was the good guy, while Nemesis embodied evil. Both are believed to have died in a fiery warehouse showdown.

Fatherless Sam lives with his single mother Tiffany (Dascha Polanco), a hard-working nurse who is always one month’s rent away from eviction. One day when Sam is savagely attacked by neighborhood bullies, reluctant Joe comes to his rescue, dispatching the youngsters with brutal efficacy.

“I believe Samaritan is still alive,” Sam eagerly proclaims. He’s further convinced when, while spying through a window, he sees how Joe’s naked back is covered with deep burn scars. But he’s obviously confused when Joe opens his freezer and it’s filled to the brim with ice cream.

Word of Samaritan’s return doesn’t resonate with villainous Cyrus (Pilou Asbaek), a gangster who believes that Samaritan only protected the rich and powerful, while his personal hero Nemesis championed justice for all the people.

To that end, Cyrus climbs up on a car and tries to rally confused Granite City citizens to support his resurrection of hammer-wielding Nemesis.

Working from a muddled if mercifully short script by Bragi F. Schut, director Julius Avery (Overlord) notes the concept was inspired by two 2000 films: “Unbreakable” and “Finding Forrester.” Yet, the filmmakers do provide a somewhat unexpected twist.

As the 99-minute plot plods on, 76 year-old Sylvester Stallone, sporting a heavy gray beard and a perpetual hoodie, stoically mutters, “I’m not going to wreck my knees entertaining you.” Yes, that’s from the actor who revived Rocky and Rambo numerous times.

On the Granger Gauge of 1 to 10, Samaritan is a familiar, formulaic 5, streaming on Amazon Prime.