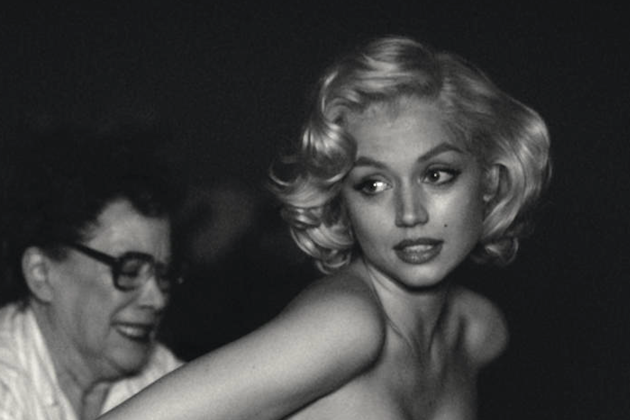 Producing a film on an iconic individual, much less a movie star, presents a problematic, controversial endeavor. The public has an image of the person, often accompanied with an emotional investment in their representation. That’s the daunting challenge embraced by director Andrew Dominik in Blonde, his adaptation of Joyce Carol Oates’ freewheeling book on Marilyn Monroe.

I’m sad to say that the results are dismal. Beginning with Norma Jeane’s childhood in Los Angeles in 1933, when she was seven, until her death at age 36, Blonde presents a sad, pathetic, pitiful woman for two hours forty-six minutes. First, her mother Gladys experiences several mentally unbalanced episodes, subjecting Norma Jeane to serious physical and emotional abuse. Her mother in an institution, Norma Jeane ends up at an orphanage before success as a model and movie star. The impact of Gladys’ illness deeply mars Marilyn’s entire life as profound insecurity, a desperate need for approval, and a crippling craving for her father’s identity and presence rule.

In press notes, Dominik notes “that trauma necessitates a split between a public self and a private self.” That single idea defines Marilyn who lacks any complex character development. Further, in a misguided, self-conscious attempt to boost interest, black-and-white footage erratically alternates with color for the entire film. In other failed attempts to buoy the story, the plot incorporates brief reenacted scenes from notable films. They include All About Eve, snippets from the Diamonds Are a Girl’s Best Friend number from Gentlemen Prefer Blondes, and the subway grate scene from The Seven Year Itch. The context struggles to prove how objectified and manipulated Marilyn felt, but it succumbs to its own sexism here and in the periodic nude interludes.

As Marilyn, Ana de Armas mimics the voice and some behavioral details, but she’s no Marilyn Monroe. Of course, no one else is or, as Blonde wants to argue, was. She was a performance, a miserable, distressed one. Having worked on this film since 2008, Dominik repetitively trots out one doleful scene after another. Was there no joy ever beyond fleeting moments? How much do we want to watch a legend suffer physical and emotional trauma—and suffer and suffer? The cheerless Blonde streams on Netflix beginning September 28.