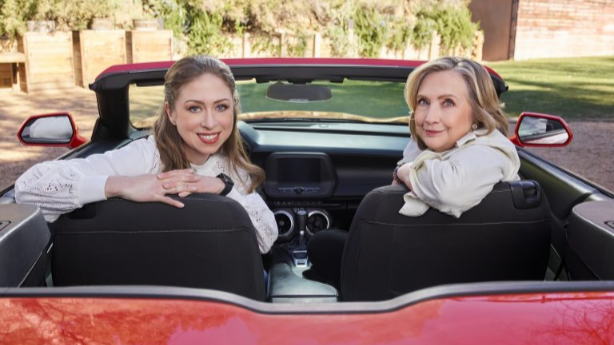 If you’re a devoted Hillary Clinton fan, curious about how her daughter Chelsea grew up and/or a diehard feminist, perhaps this breezy docuseries if for you. As for me, I wanted it to be so much more…for them to delve much deeper into the inspiring issues…and to not to be so superficial.

Based on the Clintons’ best-selling 2019 The Book of Gutsy Women: Favorite Stories of Courage and Resilience, each of the eight 40-minutes episodes involves a series of interviews centered on a specific theme: Gutsy Women Have Rebel Hearts, Gutsy Women are Forces of Nature, Gutsy Women Refuse Hate, Gutsy Women Seek Justice, etc.

Perhaps one of the most controversial segments is Gutsy Women Stand Up, in which the Clintons talk with academic activist Kimberle Crenshaw at a New York Metropolitan Museum of Art exhibit of a Seneca Village, and she explains her work in the much maligned critical race theory.

In Gutsy Women Have the Last Laugh, the Clintons visit with female comics who reveal some of the unwritten rules they must still cope with, like winning over men in the audience who sit with their arms firmly folded when they come on-stage. After Chelsea voices contempt for Saturday Night Live comedians who mocked her as a child, she and Hillary go to clown school with Philippe Gaulier.

In another segment, Hillary Clinton remembers the late Madeline Albright, the first female Secretary of State, citing how her keen sense of humor was obvious in her subtle choice of dress pins.

Throughout it all, while Hillary still seems rather self-conscious and guarded, Chelsea reveals her wit and intuitive intelligence. As mother-daughter co-hosts, they are obviously close – which is rather endearing, considering the trials and tribulations they have endured over the years.

As a result, they’re most engaging when they’re grabbing coffee from a New York City truck vendor, telling “knock-knock” jokes on a park bench in Paris and evoking fond memories while leafing through an old Clinton family photograph album in Arkansas. And pragmatic Hillary confesses her “bravest” decision was staying with her husband Bill during and after his impeachment embarrassment.

“I think there is a pushback against women’s rights and opportunities and progress here and abroad,” Hillary says, pointing to the Supreme Court’s reversal of Roe vs. Wade. “There’s also an undercurrent of misogyny and sexism that is now much more public and, sadly, acceptable because of social media…We need to fight back politically so that the space for women doesn’t continue to narrow.”

On the Granger Gauge of 1 to 10, Gusty Women is a somewhat frustrating 5, streaming on Apple+.