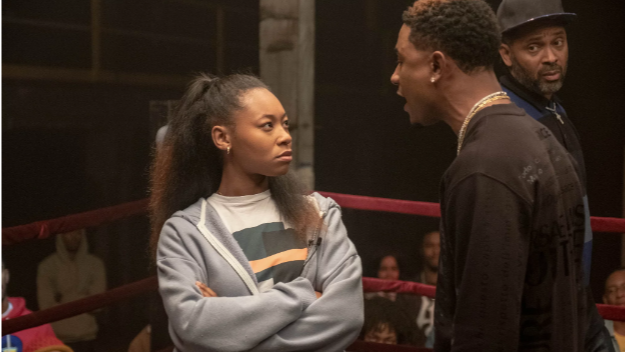 Don’t be surprised if you find yourself thinking about The Hate U Give while watching actor Sanaa Lathan’s feature directorial debut On the Come Up. Both films are based on best-selling YA novels by Angie Thomas, both are set in Thomas’ fictional Garden Heights neighborhood, and both center the stories of Black teen girls who must decide when and how to speak up for what they believe in. But On the Come Up stands on its own merits as a compelling look at what it means to be authentic and true to yourself as an artist.

Jamila Gray stars as Briana, aka “Lil’ Lawless,” a 16-year-old high school student whose skill in the rap-battle arena is attributed to her legacy as the daughter of Lawless, a much-admired rapper from Garden Heights whose life was cut short by gang violence when Bri was a toddler. Bri comes alive when she goes head to head with other rhymers, her words flowing with sharp wit, insightful observation, and killer rhythm. She does it because she loves it — but the idea of fame and fortune is appealing, too, especially when her mom, Jay (Lathan), who’s in recovery from drug addiction, is out of work and having trouble paying the bills.

So Bri turns to Supreme (Method Man), a slick, rich producer who was close to her father and thinks he can make a star out of her, too. But when her debut song — a catchy but controversial rant that taps into her anger at being racially profiled and pinned to the floor by security personnel at her high school because she dared to sell other kids candy — blows up and gets blamed for sparking violence, Bri must decide who she really wants to be as an artist.

The stakes aren’t as high in On the Come Up as they were in The Hate U Give, but both stories are based in authentic lived experiences and benefit from strong female performances. Gray and Lathan are wholly convincing as mother and daughter, and Da’Vine Joy Randolph — who is also excellent in Only Murders in the Building — is great as Bri’s loyal but hot-tempered Aunt Pooh. The movie’s plot points may feel a bit familiar to those who’ve seen movies like 8 Mile (or watched a few episodes of Behind the Music), but the themes resonate, and the messages are more timely than ever in today’s world.