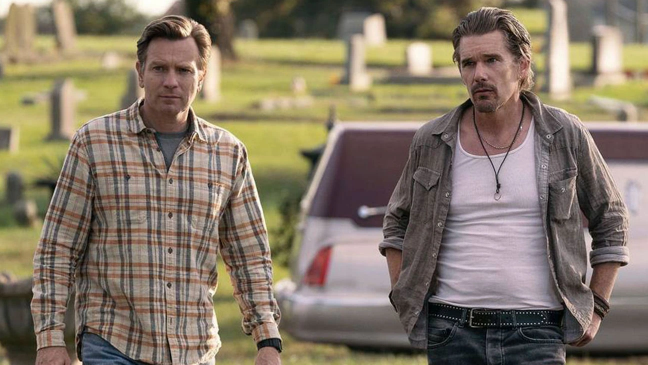 One of the good things about film festivals is that you can watch films that are not just too overloaded with heavy subjects. But with something that can make you feel good, have some humor and literally, just serve as a gateway from the everyday routine. Raymond & Ray is a film that might be far from the festival format, but once you begin to watch it, there is nothing more you would want to see.

Raymond (Ewan McGregor) and Ray (Ethan Hawke) are two brothers that do not see each other that often. Their father, Harris, passes away, so it’s Raymond who delivers the bad news. Ray would not care less and was reluctant to even attend the funeral. Despite that, he hops into his half-brother’s car to say his final goodbye to their parent. But the moment the journey begins, it becomes obvious that it’s not going to be easy. In fact, despite being filled with laughter, sadness and some shocking scenes, Rodrigo Garcia’s film is even more than just all that.

Ray had an issue with addiction of alcohol and barely recovered. Three years sober, having him revisit the past due to his father’s death, the man fights hard not to get back to what he left behind. We learn that he buried his wife – the woman who helped him to step onto the right path. When he meets Kiera (Sophie Okonedo), he sees in her the ray of light; but the light can break his heart as well, which he’s afraid of. Raymond, on the other hand, is more at peace with this father and does not hate him as much as Ray does. But when the funeral sequence approaches, behold the sight, for it will unforgettable.

Written and directed by Colombian filmmaker Rodrigo Garcia, Raymond & Ray is a comedy drama with some exceptionally written lines that will make you laugh really hard. Despite the heavy concept at times, the film does not overload you. It provides a relaxed atmosphere, in which, you can connect with characters. Thanks to the beautiful performances by the entire cast, our heroes becomes alive and believable. Ethan Hawke and Ewan McGregor made good on-screen brothers and that would make you want them reunite more often.

As for the concept, it shows how little we know about our parents, especially how little Raymond and Ray know; if their father had a chance, he would probably impregnate every woman he ever dated! Even though the brothers have nothing good to say about him, it’s their father’s friends and acquaintances who are fond of him. Maybe their father was a better friend, a good lover, but never a good parent. It’s something the brothers must explore in order to find a way to cure themselves from the hatred they have buried in their heart and begin their new life with a new chapter.