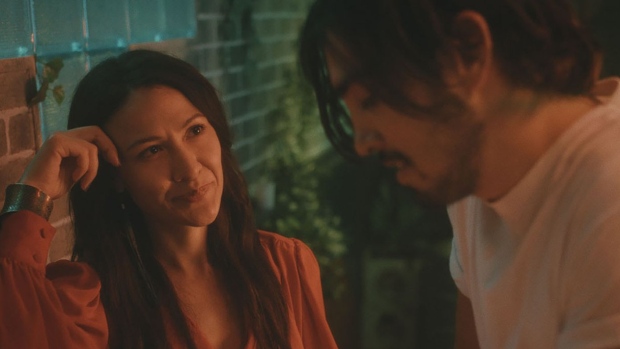 We are connected to all nature, and the people in our past, present, and future. That at least is one thread that binds together the universe of indigenous writer/director Darlene Naponse’s heady, theatrical realist film Stellar. Steeped in the philosophies, traumas, and yearnings of two representative First Nation members, the tale follows the dive bar encounter of two strangers, She (Elle-Máijá Tailfeathers) and He (Braeden Clarke) who feel magnetically connected. He and She are, as they call themselves, “bruised souls”, which is how they cinematically carry the burden of their indigenous ancestors, and well as all those around them still struggling with colonialist damage.

She walks through a Canadian city’s dark streets, choosing a bar empty of drinkers, attended only by the bartender and He, at the other end of the bar. It becomes clear disaster is happening outside, as indicated through the bar’s picture window. Inside, though, begins a journey of healing, through the touch and emotional vulnerabilities She and He share. Juxtaposed with their experience, alone after the bartender runs for cover, is the natural world, with both the macro and micro on display. It is primordial and ageless, wreaking havoc as it will.

These two, standing in for Adam and Eve, and for every generation of indigenous Canadians, allow the magnetism that has drawn them together to slowly dissolve their defenses with each other. They speak both English and their First Nation language, switching back and forth as they interact. He, as he stands at the jukebox, asks in English, “Any requests?” She responds, in their shared indigenous tongue, “Something to match this weather.”… and so it goes. People come and go. Two white women, terrified of the revolving natural disasters, warn them to take better cover. A Black man enters the bar walking in slow motion, speaks poetically, then departs. An older indigenous couple fall into the bar laughing, with one relating to She and He, “Mother Earth is speaking to us today.”

One beautiful element of Stellar is that Naponse chose only indigenous musicians for the film. Music lovers should check out Elisapie and her release Ballad of the Runaway Girl, as well as the songs by Aysanabee, Biawanna, and Samantha Crain. The entire soundtrack is beautifully curated.

Naponse, a member of the Atikameksheng Anishnawbek First Nation in Northern Ontario, Canada, has used Stellar to create a world outside of time wherein She and He can, from a safe distance, examine a world that centers on white people. They are also witness to an apocalypse, and at times that seems to be about the genocide, assimilation, and betrayal of First Nation Canadians, and at other times it speaks to the global warming and environmental disasters created by the white world. There is a lot of symbolism in the dialogue and visual language of the film, some of which is subtle, some of which is a bit clumsy and heavy handed. The actors work valiantly to speak the words that are meant to be both intimately individual and universal, but sometimes their dialogue seems full of non sequiturs. Still, it must be difficult, with two people representing an entire world, not to paint with a broad brush. Stellar is experimental filmmaking, and works best from a distance, but a worthy film, as it speaks to subjects rarely examined onscreen, using talented indigenous artists to do so.