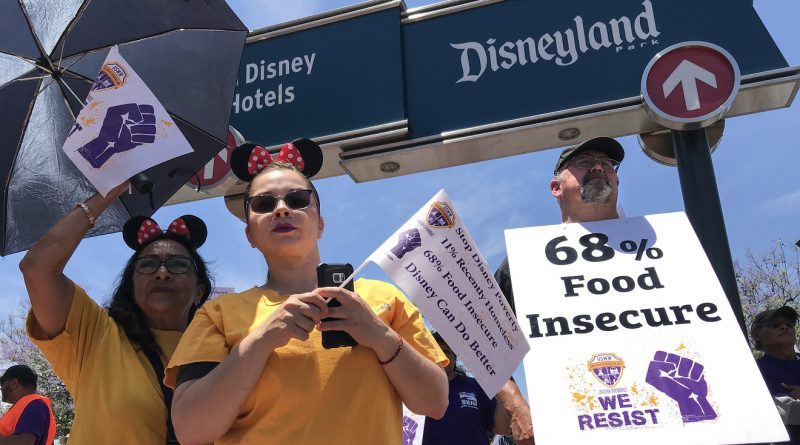 Anyone who’s watched a Disney film in the past several decades — and isn’t that pretty much everyone? — has seen the studio’s castle logo flash across the screen, accompanied by the tuneful When You Wish Upon a Star.

It’s an orchestral version, so you don’t hear the lyrics of the Oscar-winning Pinocchio melody, except perhaps in your head: “When you wish upon a star, makes no difference who you are … “

If only that were true. But, as The American Dream and Other Fairy Tales contends, it’s far from reality — especially for many who work at Disneyland, billed as “The Happiest Place on Earth.”

The documentary explores a wide-ranging array of themes. Or, to use the Disneyland model, lands — from the Fantasyland of happy “cast members” to the ominous Tomorrowland of employees who wonder how they’ll ever feed their kids and pay their rent in pricey Southern California.

Our tour guide through this sometimes tragic kingdom is a real-life Disney princess: co-writer, co-producer and co-director Abigail Disney.

Her great-uncle was Walt Disney himself; her grandfather, Roy O. Disney, co-founded the future Mouse House with his brother. (“They were kind of like Pinocchio and Jimmy Cricket,” Abigail explains. “Sort of id and superego.”) And Abigail’s father, Roy E. Disney, was a senior executive at the company — before becoming a serious critic of its corporate culture, then fighting to save it from a hostile takeover.

Following in her father’s footsteps, Abigail Disney has not only criticized Disney but other corporate behemoths, testifying before Congress to advocate for higher taxes on the wealthy.

Reflecting that perspective, Abigail Disney and co-director Kathleen Hughes widen The American Dream’s focus from the Disney-centric to the big picture, exploring how the past half century’s trickle-down economic policies and “greed is good” philosophy have led to a vanishing middle class and an ever-increasing chasm between corporate executives and the workers who make their corporations work.

“This isn’t just a Disney story,” Abigail Disney writes to the “two Bobs” atop the corporate hierarchy: past chairman Robert Iger and current CEO Bob Chapek. “It may not be our fault but it is our responsibility.”

None of which has stopped Disney from raising admission prices at its theme parks — or seeking new “cast members” to replace the ones broken down and driven away by, among other things, an extended COVID-19 shutdown and ongoing labor disputes.

The documentary also briefly explores the cozy — some would say corrupt — relationship between Disney and the city of Anaheim. (The American Dream debuted at the Sundance Film Festival before news broke in May of an FBI corruption probe surrounding Disney’s campaign spending in Anaheim — and the outsize influence those contributions bought.)

Talking heads and clever animated sequences help illustrate the documentary’s larger themes, but it’s the interview and archival sequences that give The American Dream and Other Fairy Tales its often haunting quality.

Family movies and recollections show how Abigail Disney came to realize that “having the last name Disney is like having a weird superpower you didn’t ask for.”

But at least she has power — unlike the featured Disneyland employees who live in their cars, visit local food banks and otherwise scramble to maintain their day-to-day existence.

“You gotta roll with the punches,” one says during the year-long pandemic shutdown. “It’s hard to get worried about something when you never had an opportunity in the first place.”

As When You Wish Upon a Star promises, “If your heart is in your dream, no request is too extreme.”

But that’s Fantasyland, not Disneyland. And, as The American Dream and Other Fairy Tales maintains, the two are very different places indeed.