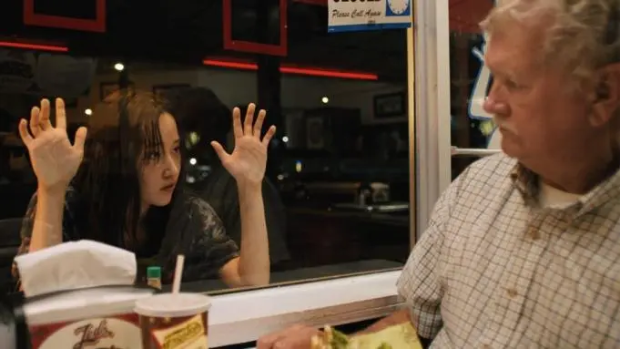 Ana Lily Amirpour’s thrilling feature film, Mona Lisa and the Blood Moon, is set in trippy New Orleans. The film’s opening sequence sees a young woman — the titular Mona Lisa Lee (Jeon Jong-seo) — using her extraordinary power of psychokinesis to escape from the padded cell where she’s been warehoused since her early childhood.

Once she gotten passed the bars that have caged her, Mona Lisa runs away to seek a better life elsewhere. She knows almost nothing about the outside world but she knows enough to quickly shed her straight jacket and don some groovy street shreds. Looking almost ordinary, she blends in with New Orleans weirdos and her innate sense of survival and extrasensory skills help her to negotiate her way out of one bad situation after another — including a hook up with a tough street smart stripper (Kate Hudson) who exploits Mona Lisa’s powers of control to move men to empty their savings accounts via commercial cash machines.

The stripper has a young son (Evan Whitten) who befriends Mona Lisa for real, and she finds her first romance with Fuzz (Ed Skrein), a random DJ who is quite fascinated by her and is willing to become her champion. You’ll be fascinated by her too.

The film requires your suspension of disbelief. Go along for the ride and be thoroughly entertained by Mona Lisa’s story which delivers all the tantalizing empathy-laced twists, quirks and oddities we’ve come to expect from Ana Lily Amirpour, and for which we adore her work.